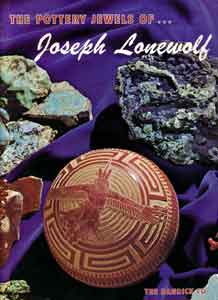 From the Foreword:  Joseph Lonewolf of Santa Clara is the finest Pueblo potter who ever lived. Until he began to create pieces for public distribution in the early 1970's, his genius was known to only a small circle of relatives and acquaintances. During the intervening half decade, his work has become an international standard of excellence.

The marvels he creates are the result of a rare combination of talent, dedication and innovative zeal. The talent, which is immense, was patiently developed. He worked long days, and longer nights, for many years perfecting his skills and formulating new techniques based upon traditional methods.

If there is a single key to the uniqueness of his art, it lies in the restless imagination of this man. The only time he is truly at ease with himself and his work is when he is grappling with new thoughts and new forms of expression. Joseph doesn't walk round and round on a circular treadmill, picking up a lump of day at the beginning and dropping off a completed vessel at the end. Rather, he climbs a spiral staircase. In the building and finishing of his pottery, certain steps must be taken in exactly the same fashion for every single vessel he creates. Other steps need not be precisely duplicated. And it is the alteration of these variables, that allows Joseph to complete each artistic circuit at a point perceptively above those which preceded it.

Even at the very beginning of his career, Joseph was not satisfied with simply replicating the pottery for which his people are famous. On surfaces that traditionally were all black, he began to selectively introduce areas of orange. Then he developed his sgraffito method of incising designs. Later he combined sgraffito with the selective introduction of orange on a black background. Still later, he began to occasionally include other colors and various sculpted embellishments. His mind and hands are constantly creating new fashions. Not content merely to vary the size and shape of his vessels, he recently has begun to modify the form.

What's next? Joseph currently is in the midst of several projects that promise to send him off in yet other directions. Only one thing is certain: when the next retrospective look is taken at the work of Joseph Lonewolf, our vantage point will be from higher up the spiral staircase.