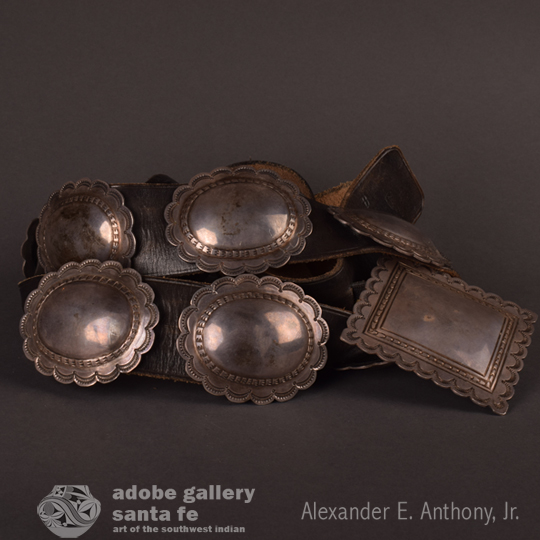 Concha belts had their introduction in the mid-1870s on the Navajo Reservation.  The Navajo source for silver in the early days was both American and Mexican coins. These coins were hammered down into discs and fashioned into rounds or ovals that resembled sea shells.   The decorative stamp work emulated finely tooled leather designs seen on the saddles and horse tack of the Mexican Vaqueros.  In wearing a gleaming silver belt the owner advertised his wealth and prestige not only in the community but to outsiders.

Although the artisan of this piece is currently unknown (the buckle is stamped JP), this belt exhibits exceptional workmanship and design. Each of the eight highly-domed conchas is bordered with a scalloped edge. The outer scalloped border is repeated again with skillfully arched stamp work.  Each concha is further enhanced with decorative track work that emphasizes the central domed area.

The buckle is large and repeats an overall design that is free of complexity, but rather simple and tasteful.

Condition:  this Navajo Silver Concha Belt with Eight Conchas is in original condition with only very minor scratches

Provenance: from a collector in the Midwest