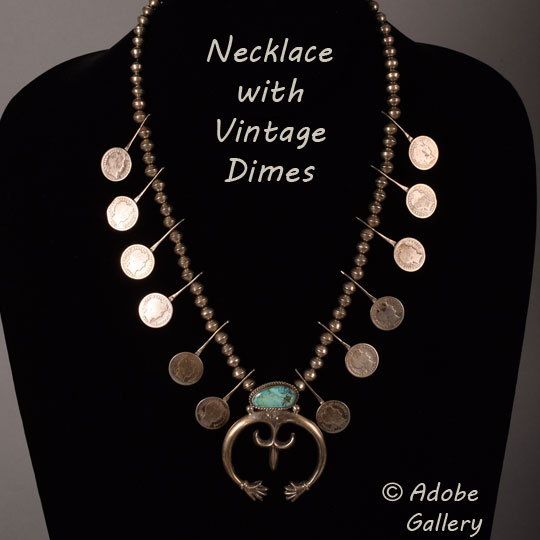 This necklace was made in the style of a squash blossom necklace. Vintage United States dimes were substituted for the traditional squash blossoms. The 90% Silver Barber dimes date from 1895 to 1916. The naja is exceptional with the curved arms ending in hands with spread fingers. The center of the naja hosts a fleur de lis, and a beautiful turquoise rests atop the naja.

The necklace appears to date from the mid-twentieth century. The turquoise has a natural divot near one edge, and the naja has excess silver just below the turquoise. Neither of these is a fault.

The rare aspects of this necklace are the 12 silver Barber dimes that are over 100 years old, and the naja with the spread finger hands. Naja with hands are much rarer than others.

"When a naja ends in hands, it is easy to think of the whole symbol as a pair of encircling and protecting arms. The Moors carried this amulet to Spain, and the Spaniards in their turn to their North American colonies." [Bedinger 1973:77]

The Arabs carried the crescent with them when they joined the Berbers of North Africa, creating what we know today as the Moors. The Arabs took the crescent and added the Mediterranean symbol of hands, eventually turning it into a religious symbol of Islam. From the Arabs to the Moors, to the Spanish, to New Spain, and to the American Indians of the Southwest, we have the naja with hands. [ibid]

Provenance: this Silver and Turquoise Necklace with Vintage Dimes is from the collection of Bob & Louise Sluder, Dealers/Collectors active from 1955 to 1990