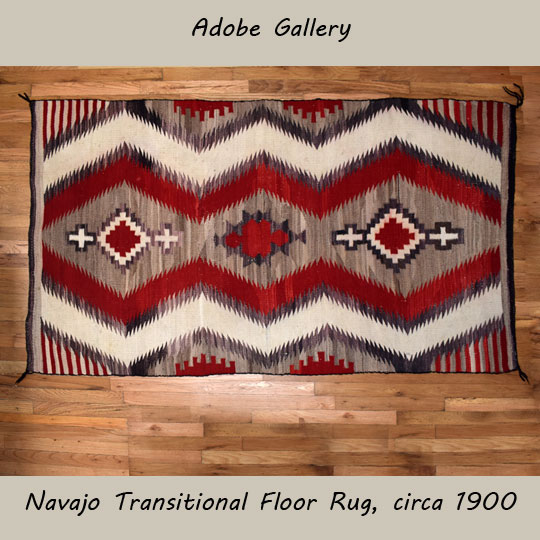 This textile is one that was made around 1900, plus or minus a decade—a time known as the Transitional Period.  It was a time when Diné blankets were being considered for use as rugs in non-Indian homes.  Navajo blankets were of standard sizes—large, medium, or small—for men, women, or children.  This one is too long for use as a blanket, so it was made with use as a rug in mind.  It still has a blanket pattern, symmetrical design, and borderless.

The rug was probably the product of a weaver from the area of the Ganado Trading Post.  The two predominant designs are the stacked squares in red, white, and black, with crosses on two ends.  Wide red, and white zigzag bars flow the length of the rug.  Narrow red and brown bars set the framework for the corners of the textile.  This rug is dynamic and exciting.

When speaking of the Transitional Period of Navajo textiles, it is that period when the Diné weavers began to convert their efforts from wearing blankets to floor rugs.  This period roughly dates from 1880 to 1920.  What spurred this change was the opening of trading posts on the reservation as early as 1870.  Traders were looking for outlets for the products the weavers were making.  It was the belief of the traders that a market existed in the eastern United States, but that the textiles needed to look more like Persian rugs than the current Navajo blankets.  The solution—add a border on all four sides.  There were many experiments and changes over the period in yarns, colors, and designs, but the added border was the key.

Weavers were not against these changes as they would be responsible for creating a market for their efforts, however, a superstition of the Diné stood in the way.  The Diné strongly believed that one never closes a circle without an escape path.  This applied to rectangular borders, too.  Probably without revealing their solution to traders, the women placed a yarn from the innermost border through the outer border.  This we know today as the weaver’s pathway.  That line of yarn broke the border, satisfying the superstition.

Condition:  The rug has had extensive use on the floor. The weft wool has worn thin in some areas revealing the white warp threads.  There is some minor bleeding of the red dye.

Provenance: this Navajo Transitional Period Floor Rug, circa 1900 is from the collection of a gentleman from California

Recommended Reading: The Navajo Weaving Tradition 1650 to the Present by Alice Kaufman and Christopher Selser