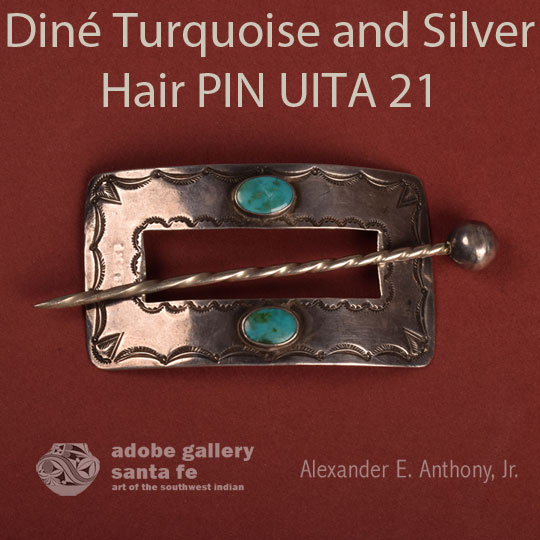 Two oval shaped cabochons of high grade blue-green turquoise are the focal point of this 1940s Navajo silver and turquoise hair clip.  Made in the United Indian Traders Association studio of Julius Gans, this clip was made according to the high standards that UITA required of its artisans. The silver was carefully cut and decorated with classic Diné stampwork that accents the beautiful color of the turquoise. The clip is arched and perfectly shaped to allow for the silver pin to grasp the hair.

According to an article from an exhibit at the University of Northern Arizona: “In 1931, a group of trading post owners and operators founded the United Indian Traders Association (UITA), a non-profit organization dedicated to ensuring the authenticity of Native American arts and crafts.  B.I. Staples was named the first president of the association. The first offices were at the Inter-tribal Indian Ceremonial Association hogan on Santa Fe Plaza in Gallup, New Mexico. The UITA's stated goals were: 1) to promote improved business practices among Indian traders, arts and crafts dealers, Indians, and all related agencies;  2) to promote, encourage, and protect the manufacture and sale of genuine Indian handmade arts and crafts; and 3) to promote the general welfare of those engaged in the business of Indian trading, as well as the welfare of the Navajo Indians and all other Indians of North America.”

Every item made in a UITA studio was stamped with the organization’s initials as well as a number indicating which studio it was. Number 21 was the studio of Julius Gans in Santa Fe. Gans was one of the first traders to publish a catalog featuring jewelry, pottery and textiles.

This hair clip is stamped Sterling and UITA21.

Condition: The Diné Turquoise and Silver Hair Clasp UITA 21 is in very good condition. One of the stones has a small crack, but it does not detract from the overall look of the piece.

Provenance: From the collection of a Santa fe resident

- Indian Jewelry of the American Southwest by William A. Turnbaugh