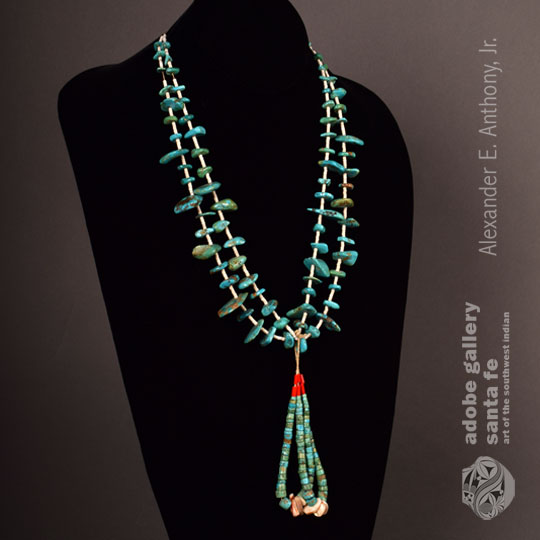 A necklace of turquoise has special meaning to the Natives of the Southwest.  This appreciation for the powers of turquoise has existed in the Southwest for a thousand years or more.  The Ancestral Puebloans were the ancient ones, the ones who preceded the contemporary pueblo peoples. At such a ruin in Utah in 1960, archaeologists unearthed a buried female who had passed away around 1100. Around the neck of the remains was a beautiful turquoise necklace.

Bits of turquoise were put in bearing beams of buildings to strengthen them, offerings of turquoise were made at sacred shrines, Medicine Men used it in diagnostic and healing rituals, and it was often used in burials. It is a unique sign of wealth and is seen in abundance at ceremonial dances at the pueblos of New Mexico.

The Pueblo Indians of New Mexico mined turquoise at Cerrillos, about 30 miles south of Santa Fe, for centuries. Turquoise has religious, ceremonial, superstitious and economic values to the Pueblo Indians.

The white shell heishi beads strung between the turquoise nuggets were made from seashells, which were originally traded from natives from the Gulf of Mexico and the natives of California.  Presumably, the Pueblos traded turquoise for shells.  The shell is cut into small squares, about ¼” x ¼” and then drilled in the center.  It is then strung on string and sanded until each square is round and of the same diameter.  The necklace is traditionally strung on cotton string as it is less abrasive to the stones and shell than other materials.

The jaclas suspended at the bottom of the necklace were originally worn as earrings by the Natives.  Eventually, their use was converted to an accessory to a nugget necklace.  The group of three off-white beads at the base of the jaclas were made from seashell.  The red tubular beads are glass.  Originally, they were made from coral.

Necklaces made by and for Native use were often made in a manner and style different from one intended for sale to a tourist or collector.  One of the unique and original differences was to drill some of the turquoise nuggets off-center.  Another difference was interspersing larger nuggets among the smaller ones.  This is an esthetic particularly liked by Navajo.

This necklace was made by a Navajo artisan for his or her own use.  It was strung on string and does not have the twisted yarn on the back that a pueblo maker would have used, one called a pueblo wrap.  The turquoise nuggets are natural unadulterated stones.  The white heishe is rarer than the brown that is seen most often.

Condition: this Navajo Two-Strand Heishi and Nugget Turquoise Necklace is in original condition

Provenance:  this necklace was turned in for pawn by a Navajo to the Balcomb family when it had a gallery in Gallup, New Mexico, in the 1960s and 1970s.  It has passed down through the family and is now being placed on the market for the first time.