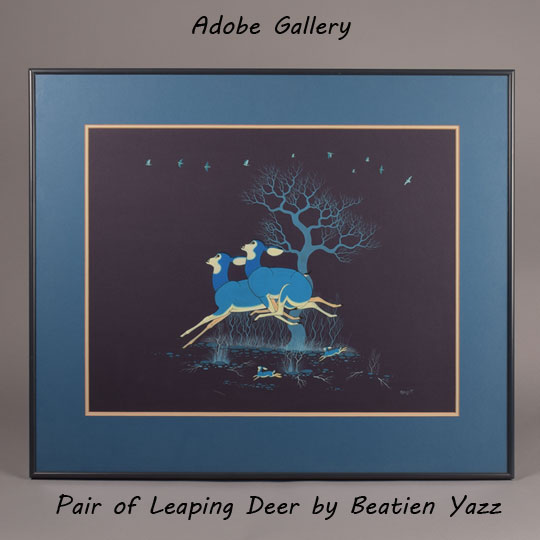 This untitled original painting was made in 1983 by Diné artist Beatien Yazz.  It is a fine example of one of the artist’s favorite subjects—blue deer.   Here, his pair of blue deer bound across a dry desert.  One of them stretches its legs forward as it prepares to land; the other’s legs are crossed as it reaches the peak of its leap.  Down below, a pair of rabbits keep pace with the deer.  Up above, ten birds fly in the same direction.

Below and behind the action, Yazz created a stylish depiction of the deer’s immediate surroundings.  Plants emerge from the center of several small clusters of rocks, and a single tree rises into the background.  Each element is made mostly of blue, which sits nicely on the dark purple board.  Cream tones fill out the faces, abdomens, and legs of the deer and rabbits, adding a touch of light to the image.  Yazz painted scenes like this many times over the course of his long career.  This one—with its dark color scheme and well-balanced composition—is a beautiful example.

The painting is signed B. Yazz and dated “‘83” in lower right.  It is framed under glass and a bold blue matting in a thin metal frame.

Beatien Yazz (1928-2012) Little No Shirt (Jimmy Toddy) was a painter who was born in 1928 on the Navajo Reservation.  At an early age, Yazz met Bill and Sallie Lippincott, traders at Wide Ruins Trading Post. They recognized Yazz’s talent and made available to him scraps of paper and other equipment so that he might practice his artwork.  Alberta Hannum’s book Spin a Silver Dollar tells the story of the Lippincotts and the young Navajo boy they encouraged. The book was illustrated by Beatien Yazz. He served in the U.S. Marines in World War II and was a member of the famed Navajo Code Talkers. Following the war, he returned to the reservation and began to paint in earnest. He specialized in subjects familiar to him in his daily life on the reservation. He has been eminently popular with collectors since the 1950s.

Provenance: this Original Painting of a Pair of Leaping Deer by Beatien Yazz is from a private Texas collection