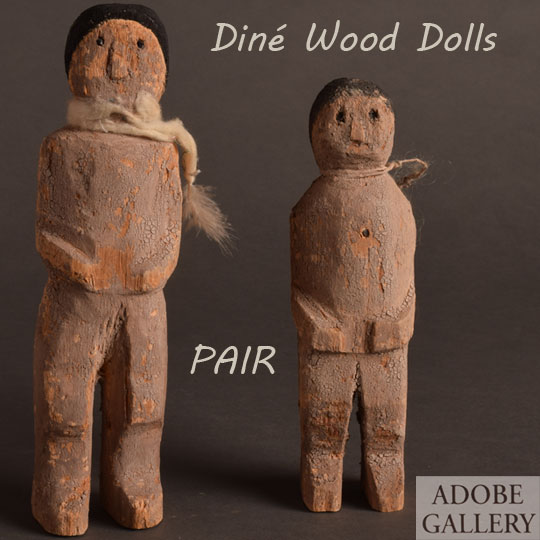 This pair of Diné carved wood figures is very simple in execution.  The carving on each one shows excellent body proportions with legs separated, hands tucked to the body, simple full-body pigment, black pigment for hair and eyes and a variety of black stone inserts at vital points of the body.

The Diné believe that an illness is caused when a person has behaved in a manner prohibited by supernatural sanctions and that such human mistakes must be ceremonially corrected if illness is to be cured.  There are elaborate 9-day ceremonies to do such but there are also smaller ceremonies that may or may not be carried out during the more elaborate one.

Carved wooden ceremonial figurines are often used in the smaller ceremonials.  They have been erroneously named “dolls” but that is an all-encompassing title.  Such “dolls” are carved from wood using a pocket knife. Their details are rudimentary but sufficient to determine they are human figurines.  Some, as in the case of this pair, have simple faces with inset eyes of jet or other material. This pair is covered with a watery pigment that has dried and cracked.  The hair is painted black on both figurines.

Turquoise, jet, coral or other stones may be inserted into a figure at specific body parts such as heart, kidneys, feet, etc.  The smaller figure of this pair—presumably a female— has several stones inserted: one at the heart, several on the back at perhaps the lungs, a single one at the kidneys, and one black stone in each eye. There are no body inserts on the larger figurine except for black stones in each eye socket.  Each figure has a feather attached to a string around the neck.

These Navajo wooden figures are tangible evidence of a particular type of common, widespread, inexpensive and brief curing ritual used for children and adults with the purpose of correcting and nullifying human error in behavior that has caused a person to become ill.  The figures are visible items with which the patient can visualize himself being cured by the medicine man conducting the ceremony. Their function is to exorcise the sickness from the patient, thus removing the power of the sickness that has possessed the patient.

There is no indication that this pair was ever used in such a curing event but the body pigment would indicate that they do have a rather long existence.

Provenance:  this RARE Navajo Pair Wood Carving Doll Figurines by Diné Artist is from from a gentleman in Pennsylvania