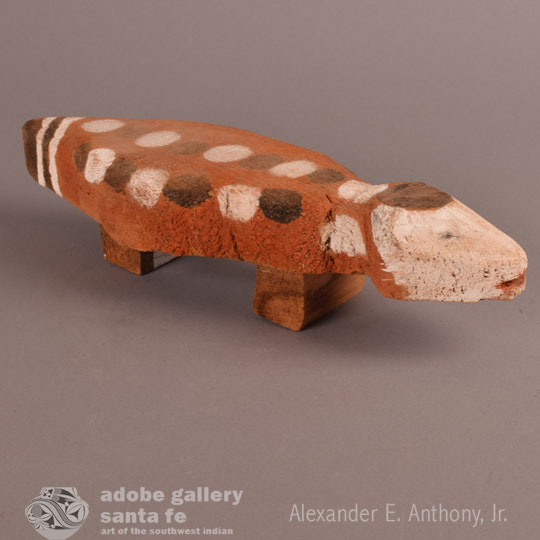 Diné folk artist Charlie Willeto created a charming piece with this Navajo wood carving of a salamander.  Willeto created many animal figures during his short but fruitful career, including a wide variety of reptiles and amphibians.  This piece is made of three pieces of wood: one foot-long main piece and two small blocks, which are nailed to the bottom of the main piece.  The salamander’s body is painted bright orange. Lines of dots run down its long body, alternating between grey and white. Black and white lines circle its tail.  Its head is white with a large black dot. A small mouth is carved into the salamander’s head; its interior is painted orange. This is a wonderfully unique early Willeto carving.

Charlie Willeto (1897-1964) was a Diné artist who was unrecognized during his lifetime but has, in recent years, received a great deal of acclaim for his folk art carvings.  Willeto’s father Pablo Walito was a Diné medicine man; his mother Adzaan Tsosie “Slender Woman” was a medicine woman. Willeto followed into his parents’ profession, and also married a woman who was born into the traditional Diné healing arts. In 1961, Willeto began creating the carvings for which he is celebrated today.  The carvings ranged in size from a few inches tall to nearly life-size, with the majority standing between one and three feet. Willeto is believed to have completed about 400 carvings in total. Today, his works are included in prominent public and private collections including the Smithsonian and the Museum of International Folk Art.

Condition: this Navajo Wood Carving of Small Male Figure by Charlie Willeto is in excellent condition