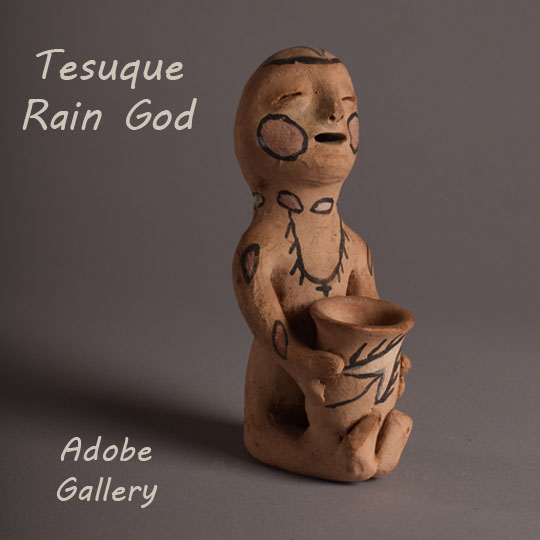 This Nineteenth Century Tesuque Pueblo, TET-SUGEH Rain God Pottery Figurine has a cream slip and is highly decorated with painted designs.  He wears a cross necklace, painted feathers on his head, rosy cheeks, marks on his arms and neck and an arrowhead decoration on his jar.  These rain god figurines were all basically the same form—seated male holding a pottery vessel.  Earlier figurines were seated males with genitalia and no jar hiding that fact.  The merchants probably encouraged the potters to conceal genitalia with a vessel.  When the jar was added to the figurines, they became rain gods. Santa Fe has been a recognized art community for a hundred years now.  The impetus for that accolade was the opening of the Museum of Fine Arts in 1917.  Edgar Lee Hewitt had convinced the Territorial legislature to fund a museum, and then he and his associates set about to bring attention to local artists.  Any artist was free to display works of art at the new museum at no cost to the artist.  Hewitt also worked with local pueblo potters to improve the quality of pottery and other art forms and to discourage cheap tourist wares.

Hewitt probably was not pleased with Santa Fe merchants who, as early as 1880, were promoting Tesuque rain god figurines as representing something for which they did not accurately represent.  These were intended to appear as “religious or ceremonial” items from the pueblos but they did not exist until created just for the merchants.  Fortunately, they have risen from the cheap tourist curio of the last century to achieve a status as a collectible today.

Condition: he has fared well over the past hundred years.  Still has all his fingers and toes. Paint is in excellent condition.

Provenance: this pottery figurine is from an Albuquerque family collection