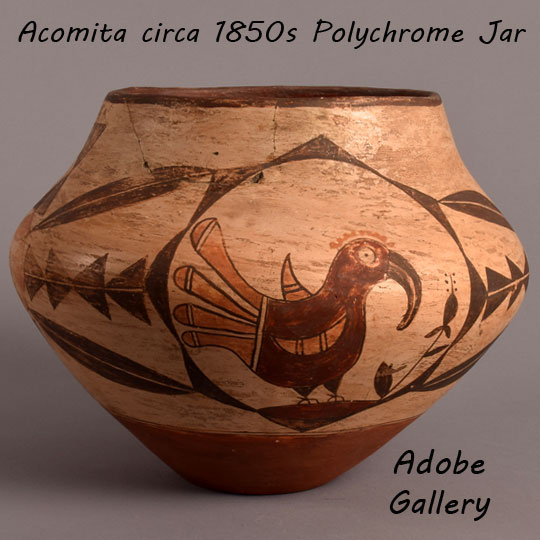 Somewhere, sometime, somebody established names for different periods of pueblo pottery.  Excavations at prehistoric sites unearthed hundreds of years of pottery examples and names were assigned to each period.

At today’s occupied pueblos, archaeological excavations have generally not been permitted.  One very limited excavation permitted at Acoma in the early 20th century revealed that earlier pottery was decorated glazeware—designs applied with a paint containing lead ore.  From excavated examples Frank Harlow was able to extrapolate that Acoma glazeware spanned the years from 1300 to 1700.

Pottery naming is not arbitrary but is comprised of two parts—first word being place of origin and the second being an attribution.  Starting after the period of glazeware at 1700, the first category at Acoma is Ako Polychrome, 1700-1820—Ako being the official name of Acoma Pueblo and Polychrome being more than two colors.  Next is Acomita Polychrome, 1780-1850, Acomita being one of the farming villages at the base of the mesa.  Lastly, there is Acoma Polychrome, 1840 to present, Acoma being the current accepted name of the pueblo today.

This jar has the weight and thick vessel walls associated with Acomita Polychrome jars. Acoma Polychrome jars, particularly 20th-century ones, have very thin walls and are very light in weight.

Designs on both periods of pottery are all over the scale because designs were the product of individual potters and much creativity has been observed in the many jars collected from both periods.  The use of parrots on jars is more related to early Acoma Polychrome than to late Acomita Polychrome. The parrot design was not necessarily a result of Spanish influence, which it has been tied to by some observers.  Colorful birds such as macaws were at Acoma before the arrival of Spanish Conquistadores.  Trade with Mexican Indians was well established before 1600.  Acoma potters were familiar with colorful birds but, still, parrots are seen on more pots after 1880 than on those of an earlier date.

Condition: a section broke out of the rim and has been glued back in place.  There is some abrasion to the painted design.

Provenance: this Acomita circa 1850s Historic Polychrome Pottery Jar with Parrot Design is from the collection of a prominent Santa Fe family.

Reference and Recommended Reading: The Pottery of Acoma Pueblo by Harlow and Lanmon