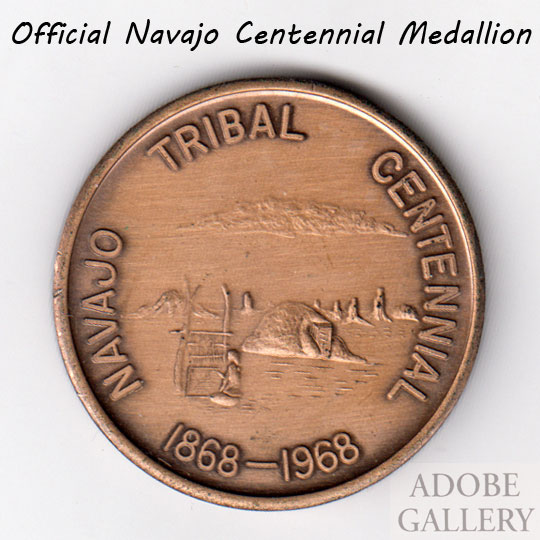 This official Navajo Centennial Medallion bears on its face a Navajo woman engrossed in her traditional occupation of rug weaving.  In the background are pictured a primitive hogan, which many Navajos still construct for shelter, and the beautiful landscape of Monument Valley which holds great religious and historic significance for the Navajo.

The reverse side holds symbols indicative of the “Century of Progress”—the traditional occupations of farming and sheep raising, the derrick representing the great wealth of gas and oil that is found beneath the Navajo lands, and the gigantic power plant of the Arizona Public Service Company which is located on the Navajo Reservation between Farmington and Shiprock, New Mexico.  All these symbols of progress surround the Horned Sun, a religious figure and truly a great unifying factor in the lives of the Navajo People today as well as a hundred years ago. -Navajo Centennial Medallion Committee

A century ago the Navajo Tribe of Indians signed a treaty of peace with the U. S. Government.  This act culminated four years of deprivation and hardship and resulted in Federal recognition of the sovereignty of the Navajo Tribe.  The treaty was signed at Fort Sumner, New Mexico, on June 1, 1868. It was approved and confirmed by the Senate on July 25, and proclaimed by President Andrew Johnson on August 17, 1868.

On June 28, 1968, a huge caravan of Navajos on horseback, in wagons, and on foot left Window Rock, Arizona for Fort Sumner following the trail of the “Long Walk” taken by their ancestors a hundred years earlier.  Reenactment of the signing of the treaty took place in Fort Sumner on June 30, 1968.

Condition: this The Official Navajo Centennial Medallion is in original condition, protected in plastic envelope

THE NAVAJOS - Indians of North America Series [SOLD]
by