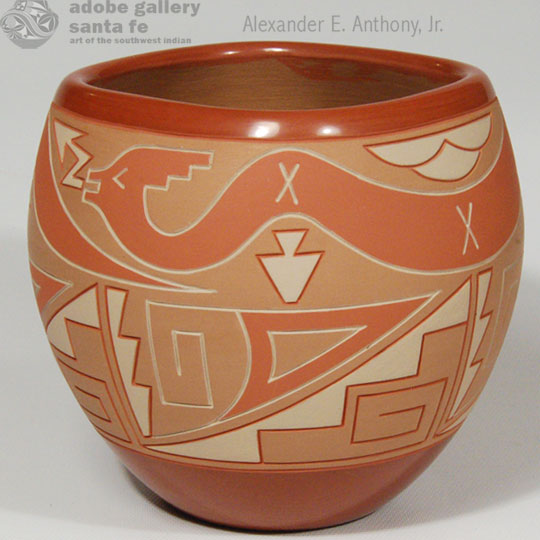 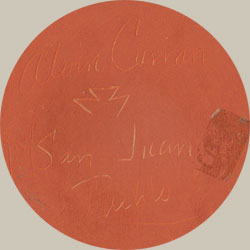 Alvin Curran was the only male potter at Ohkay Owingeh (formerly San Juan Pueblo) at the time he was potting there. He was part Ohkay Owingeh and part Quechan, a desert people along the southwest border between Arizona and California. He began living at Ohkay Owingeh at the age of one year with his maternal grandparents. He served as Chief of Police at the pueblo until his health prevented him from doing so. At that time, his mother-in-law encouraged him to learn to make pottery because she thought he would do well since there were few potters at the pueblo and he would be the only male potter.

Curran certainly learned rapidly and well. His pottery is the finest of all the traditional Ohkay Owingeh pottery produced in the last quarter of the 20th century. His designs were meticulously outlined in pencil, and then carved into the clay, once Curran was satisfied with the overall appearance. If not satisfied, he sanded off the pencil designs, and started anew.

This jar is a beautiful example of his workmanship. It was beautifully formed and finished, and the design expertly placed into position. The variety of slips used was derived from all-natural materials and the jar was fired in an outdoor firing process.  It was signed by the artist.

Condition: this Ohkay Owingeh Polychrome Jar is in excellent condition

Provenance: from the collection of a family from Illinois