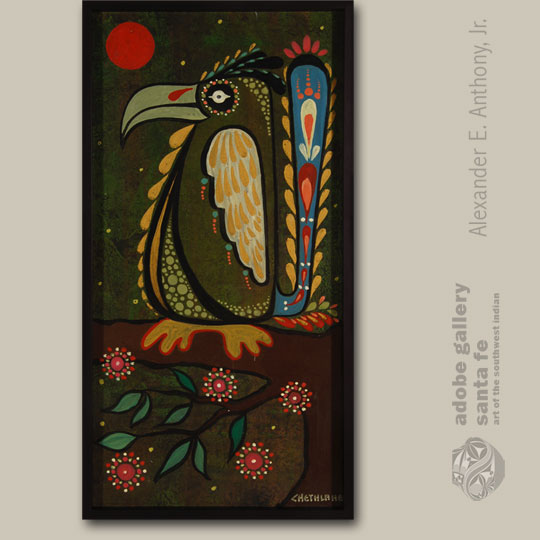 David Chethlahe Paladin (1926-1984) was a student of the Santa Fe Indian School, where he learned the basic fundamentals of painting from Dorothy Dunn.  Dunn encouraged her students to document and celebrate their cultures. As a young man, Paladin struggled with his identity as the mixed-race son of a Navajo woman and a visiting white missionary.  As he developed as an artist, he began to display a genuine affection for his Navajo culture. His style evolved considerably over the years, and ultimately drew from a wide variety of influences while always remaining grounded in his Native American roots.  Paladin—a recovering addict and World War II prisonor of war survivor—was eventually trained as a shaman, using his uniquely challenging life experiences to serve the Huichol and Tarahumara tribes in Mexico as well as his native Navajo people, or *Diné.Paladin’s work evolved drastically over the course of his career, moving away from what was common among Native American artists of his time towards more abstract contemporary work.  Though his methods changed over time, his preferred themes remained the same: spirituality, creation, and rebirth. Paladin depicted the same rituals, ceremonies and symbols as many of his Navajo contemporaries, but did so from a unique, constantly evolving perspective.  With this untitled depiction of a colorful bird, Paladin celebrates life.  It’s a strong image, due in large part to the artist’s color choices. The deep, beautiful green that serves as the background and fills in the bird’s body is itself worthy of a close look.  The variety of bright colors—reds, pinks, yellows and blues—that comprise the details of the bird’s body are used sparingly but effectively.

The piece is signed Chethlahe but not dated.  As mentioned above, Paladin spent a great deal of time in Mexico.  Many of his paintings were directly inspired by his experiences there, depicting religious rituals in vibrant, colorful splendor.  This piece bears a few notable compositional similarities to those images, the most notable of which being the small circles of colorful dots with which he punctuated the image.  While it’s impossible to say with certainty, this piece is so similar in composition and spirit to those images that it is fair to assume it to have been completed during the same period.

Condition: this Original Navajo Painting of a Colorful Bird at Night by Chethlahe is in excellent condition

Provenance: from the collection of a Colorado resident

*Note: when we say Diné, as opposed to Navaho or Navajo, we are referring to the people and not the government.  Since 1969, their government refers to itself as the Navajo Nation. 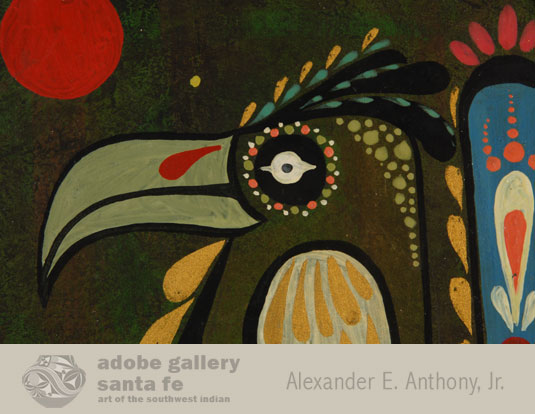