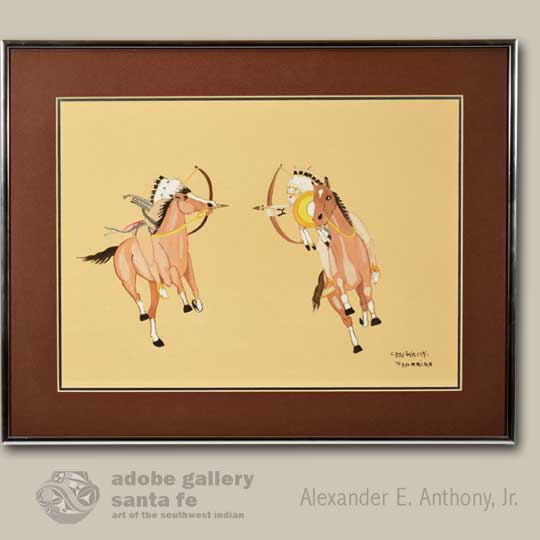 “WAARRIOS” is an invigorating image: two warriors on horseback, aiming their arrows at each other.  As one would expect of Arapaho painter Carl Sweezy and his contemporaries, there is no foreground or background.  The viewer’s attention is focused entirely on the warriors and their horses. Interestingly, the warriors themselves are mostly hidden from view by their implements and their horses.  One warrior’s face is entirely invisible, the other peeks out from behind an orange and yellow shield. Their war bonnets rise up above their obscured heads. Sweezy must have had a special appreciation for the ornate headdresses of his people, as he always handled their depictions carefully and effectively.

Sweezy’s subjects are positioned in an arrangement that is not expected of early Native traditionalist painters—they’re seen head-on by the viewer, rather than in profile.  Sweezy, who created ledger art too, handled this atypical configuration remarkably well. The horses, pictured galloping ahead at full speed, appear to be turning in towards each other.  The warriors’ bows are drawn, their arrows aimed at each other. This confrontation is about to escalate, and Sweezy captured it at exactly the right moment.

The painting is signed Carl Sweezy and titled “WAARRIOS” in its lower right corner.

Carl Sweezy (1879-1953) Wattan was a talented and influential Arapaho painter and ledger artist. Sweezy was born in 1879 on old Cheyenne-Arapaho Reservation in Oklahoma. His father was Hinan Ba Seth (Big Man) and his mother, unfortunately, died when he was very young. Sweezy attended Mennonite Mission Schools in Oklahoma and Kansas. He also attended Chilocco and Carlisle Indian Schools. Sweezy’s Indian name was Wattan, or “Black.” He was also known as “Waatina.” Sweezy’s style was informed by Plains ledger art, which was flourishing during his early life. He occasionally created ledger art and painted portraits, but he is best known today for his excellent watercolor paintings.  Sweezy’s long list of notable exhibitions includes the American Indian Exposition, Philbrook Arts Center, and the Inter-tribal Indian Ceremonials in Gallup. His works are included in the collections of the Smithsonian Institution, Chicago Natural History Museum, Gilcrease Institute, Museum of the American Indian, and University of Oklahoma.  Sweezy passed away on May 28, 1953 in Lawton, Oklahoma. 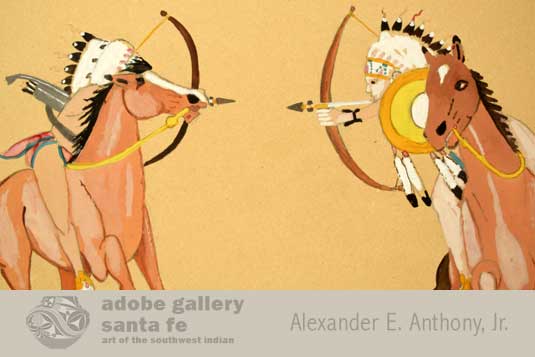