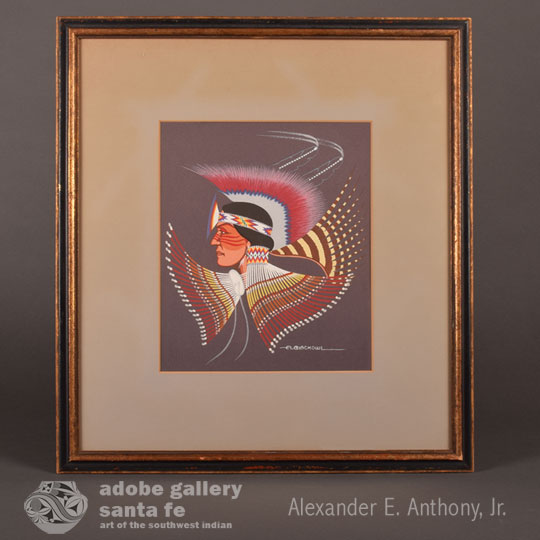 This portrait of a Native man was painted by Cheyenne artist Archie Blackowl.  Blackowl was a prolific creator of images like this one—portraits, dance scenes, and scenes of daily life completed using brightly-colored tempera paints.  With this image, Blackowl focused his attention on the face and ceremonial headwear of his subject. There is no body or background, just the man and his headwear painted on dark purple paper.  The contrasting colors of the paint and the paper give the image its strength. The majority of the Blackowl paintings we’ve seen in the past have used a similar technique. His subject here might be a grass dancer.  These dancers appear frequently in various Plains tribes’ dances, but their function and backstory vary among different groups. Blackowl’s (possible) Grass Dancer was completed with the artist’s usual skill and charm, and it will most certainly catch the attention of those who appreciate classic Native imagery.

The painting is signed “A. Blackowl” in lower right.  It is framed under a wide mat in a beautiful thin frame.

Archie Blackowl (1911-1992) MisTaMooToVa - Flying Hawk was a talented and influential Cheyenne artist who worked in the traditional style for most of his long career. Blackowl, a descendent of Cheyenne chiefs Roman Nose and Crow Necklace, was born in Weatherford, Oklahoma. He was interested in art at a very young age, but did not begin painting seriously until the early 1930s.  He studied a wide variety of subjects at many different educational institutions, and worked a wide variety of jobs, most of which were related in some way to his natural abilities as a painter. While he was active as an artist, he was most often recognized for his skills as a muralist. "Blackowl became aware of art at the age of six when he saw old Red Tooth painting a skin tipi. Encouraged by Woodrow Wilson Crumbo, he began to paint seriously in the early 1930s. During his many years as an artist he maintained his traditional style, portraying accurately the Cheyenne traditions and culture that he experienced in his life.  In his art as in his life he remained faithful to his heritage." (Snodgrass, 1968)

Blackowl’s works, which celebrate Cheyenne life and culture with the detail and accuracy of the very best traditionalists, are included in numerous prestigious private and public collections. These collections include the Smithsonian Institution's National Museum of the American Indian, the Thomas Gilcrease Institute of American History and Art, and the Wheelwright Museum of the American Indian.  He exhibited extensively and successfully at Oklahoma’s major museums during his career, and received many awards for his works. Blackowl passed away in Oklahoma in 1992.

Condition: this Untitled Painting Portrait of Cheyenne Indian by Archie Blackowl appears to be in excellent condition but has not been examined out of the frame

Provenance: entered in the Tulsa Pow-Wow Club exhibition on May 22, 1965 PEOPLE OF THE SACRED MOUNTAIN [SOLD]
by Peter Powell