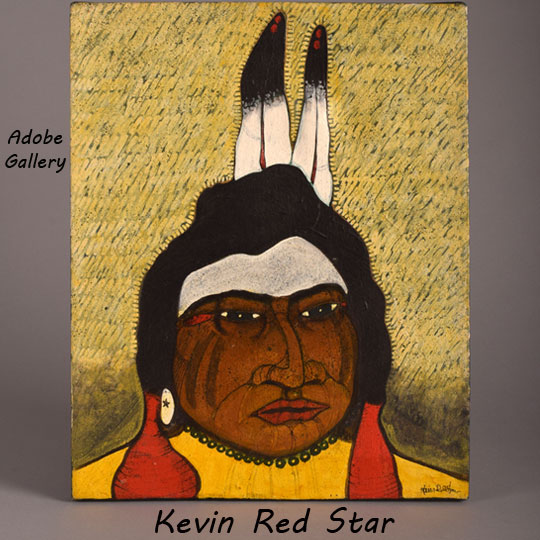 This original painting was created in 1979 by Crow Indian artist Kevin Red Star.  Its subject is a Crow Indian.   He wears braids, an earring, and a feather headpiece.  We have handled quite a few similar portraits by Kevin Red Star, and it’s interesting to see the variations from piece to piece.  His subjects’ faces are intense and captivating, always, and their surroundings are minimal but interesting.

“White Clay” is a particularly strong offering from Red Star’s series of portraits.  The colors are bright and beautiful, and they complement one another wonderfully.  Red Star’s bright yellow, red and greens surround the dark center, where a shadow falls over the man’s brown face and black hair.  It’s dramatic, and it works very well.  The man’s eyes stare off into the distance, just to the viewer’s right.  The textured background creates a mysterious setting for the scene.  This wonderful image reminds us why Kevin Red Star is such a successful artist.

The canvas is wrapped around a wood frame, known as a gallery wrap, and is ready to hang.  It is signed Kevin Red Star in lower right.  The following text is written on verso: “‘White Clay’ Crow Indian, Kevin Red Star, 1979.”

Kevin Red Star (1943- ) is an internationally known Native American painter who was born and raised on the Crow Reservation in Lodge Grass, Montana.  Red Star was educated at the Institute of American Indian Arts and the San Francisco Art Institute. He was given an honorary Doctorate Degree in Fine Arts from the Rocky Mountain College in Billings, Montana. His works are included in many prominent collections, including The Smithsonian Institution’s National Museum of the American Indian, CM Russell Museum, the Heard Museum, Denver Art Museum, Eiteljorg Museum, Southwest Museum, Whitney Museum of Western Art, and the Institute of American Indian Arts Museum.

Condition:  There is a slight wave in the canvas at the left head feather but otherwise it is in original condition

Provenance:  this Original Painting titled "White Clay - Crow Indian" by Kevin Red Star is from a private collection from a family from Tennessee