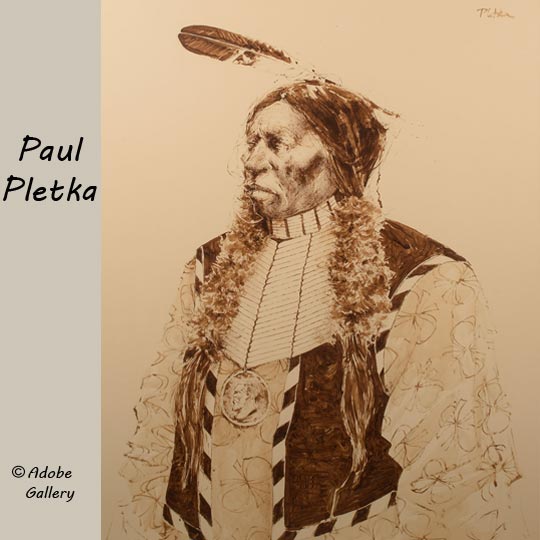 This watercolor painting was created by Paul Pletka, a New Mexico-based artist who has exhibited successfully since the 1960s. When looking through Pletka's many documented and published paintings, one will find a body of work that largely focuses on Native American subjects. Pletka's depictions of Native Americans are detailed, accurate, and thoughtful, presenting information gathered through research and observation in a style that appeals to many collectors.

With this large, impressive painting, Pletka offers a detailed portrait of a Native American man. The painting was completed using only a single brown tone, which allows Pletka's remarkable brushwork to shine. A wealth of interesting textural variation appears within the image, creating depth and movement within the figure even as he sits still. Pletka used careful shading to define his subject's facial features, resulting in a depiction that is intricate, sensitive, and undoubtedly true to life. This painting is a wonderful example of Paul Pletka's work.

The painting is signed Pletka in upper right. It is framed under glass and gently rounded off-white matting, in a wood frame.

Paul Pletka (1946- ) is a painter who was born in California but now lives in New Mexico. Pletka attended Arizona State University on a scholarship and then transferred to Colorado State University, where he studied printmaking. His work, which has been described as "neo-surrealistic", focuses on the Native American peoples with whom he has been fascinated since childhood. Pletka's technical abilities combine with knowledge of and respect for his Native subjects, resulting in works that have become sought after by collectors. His works are included in countless prominent public and private collections.