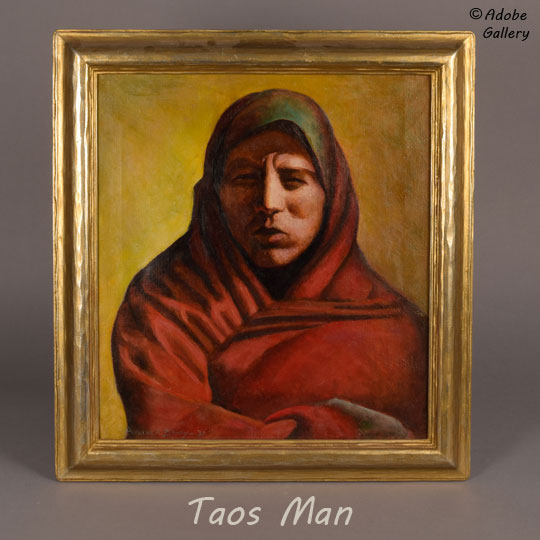 This beautiful painting by Walter Alexander Bailey illustrates a traditional Taos Pueblo Indian. The Taos Pueblo men have traditionally draped themselves in blankets, the only pueblo men known to have routinely done so. There are many paintings and photographs of men draped as such. The artist has illustrated well the way this was done.

Walter Alexander Bailey (1894-1989) was an Editor and Art Director of the Kansas City Times from 1917 to 1927 and then he moved to California where he was a studio and newspaper artist.  He then worked as a scenic and motion picture artist in Hollywood in the 1940s.  He was Art Editor of the Los Angeles Herald Examiner from 1950 to 1967.

Most important to us and to the history of this painting is that he taught a Master Class in Taos, New Mexico, from 1927 to 1929.  It was then that he probably formed his ideas of painting subjects of Taos Pueblo.  This painting is dated  1937, a time when he was in Los Angeles, and a time after he had left Taos, although it is conceivable he traveled back to Taos from time to time.  He had been awarded a Fellowship from the Tiffany Foundation in 1924.  Throughout his career he was a painter, illustrator, muralist, etcher, block printer, lithographer and teacher.  He was an exceptional artist in the medium of oil painting.

The face of the young man of Taos Pueblo is pulled into a frown, perhaps because of the sun shining on his face.  The artist positioned the subject such that sun shown only on one side of his face for dramatic effect.  The deep red color of the blanket is a strong visual attraction.  The green/yellow background of the painting provides beautiful back lighting for the man.  The painting is signed in lower left Alexander A. Bailey – 37.  It is framed in a handmade gold leaf frame that is probably original to the painting.

Condition: excellent condition and has just been professionally cleaned

Provenance: this Oil Painting titled "Taos Man" is from the home of a Santa Fe resident