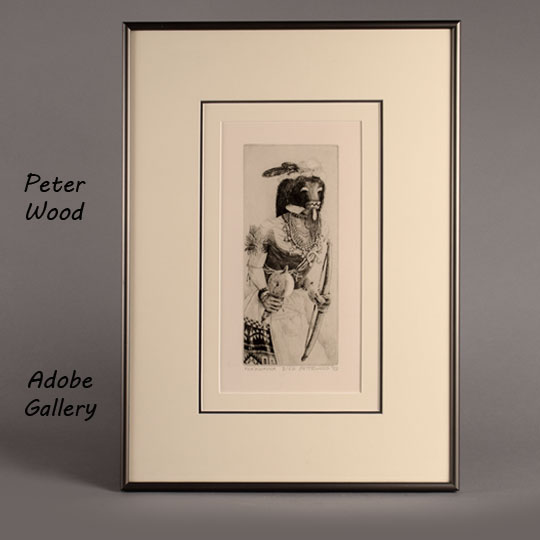 This etching of Chakwaina katsina was executed by Taos, New Mexico artist Peter Wood.  It is number 3 out of an edition of 50.  It was completed in 1993.  It is a drypoint etching and is an excellent example of the Hopi katsina.

It has been stated that Chakwaina represents Estevan the Moor, who led Fray Marcos de Niza in search of Cibola and was killed at Zuni.  There is no documented evidence of this supposition.  Chakwaina appear most often in January during the Kiva Dances—dancing in a line with rather lively gestures, stooping and turning and singing a spirited tune.  Chakwaina is a warrior.

We purchased a group of drypoint etchings from Peter Wood in 1997 with the intent of publishing an Avanyu Publishing book of his works.  For some reason, which I have forgotten, we decided not to publish the book and we then sold the etchings individually.  This is one of those which we sold and now have back.

It is beautifully framed with triple mats and a metal frame.

Provenance: this Peter Wood Etching of Tsa'kwayna Katsina, Chakwaina Kachina is from the extensive collection of a client from Oklahoma