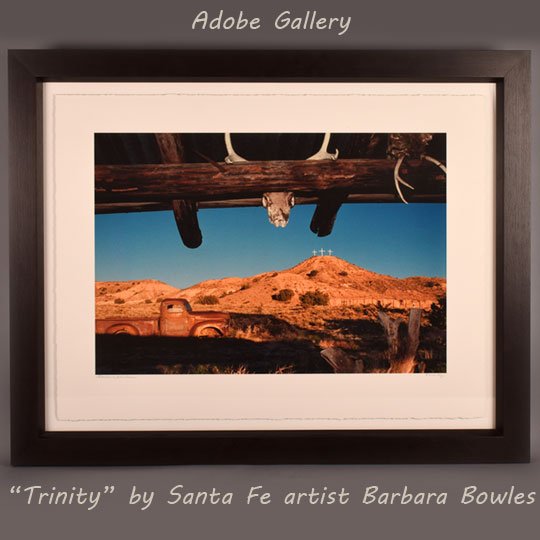 "Trinity" is a high-quality digital print of a photograph by Santa Fe artist Barbara Bowles. The source material was a 35MM color photograph taken in northern New Mexico. The negative was scanned and digitally printed onto archival watercolor paper using pigmented inks. The paper is mounted with its edges exposed on a white backing, in a thick black frame.

In “Trinity,” Bowles places the viewer underneath an overhanging roof, looking out into the desert.  Two animal skulls adorn the overhang’s thick wooden beams.  One of the skulls is placed right in the middle, staring directly toward the viewer while hanging by its antlers from a beam.  Down below, the roof’s shadow extends out into the desert, reaching its end on the side of a classic old pickup truck.  In the distance, the arid earth rises gently, forming a series of small hills.  At the top of the tallest of these hills, three white crosses stand within a bright blue sky. The Three Crosses depict the crucifixion of Jesus Christ. They represent Jesus Christ on the cross, flanked by the two thieves who were crucified with him. Bowles’ image is split into thirds horizontally, with the addition of the overhanging roof placing the sky in the center rather than at the top.  The result of this clever compositional choice is a strong and realistic feeling of depth and distance.

The image is  titled “Trinity” and signed Barbara Bowles.

Barbara Bowles is an artist and gallerist who lives and works in Santa Fe, New Mexico.  Her preferred medium is 35MM color photography.  Bowles says, “Sometimes, photography is about documenting reality; my goal is to document the abstraction in reality.  I want the viewer to discover the object within the photo and to enjoy seeing the natural world from an unusual perspective.”  Her works have been published and licensed by various organizations and acquired by many prominent public and private collectors.

Provenance: this "Trinity" by Santa Fe artist Barbara Bowles is from a private Santa Fe collection SOLDIERS OF THE CROSS: Notes on the Ecclesiastical History of New Mexico, Arizona and Colorado [SOLD]
by Most Rev. John Baptist Salpointe, D. D.

The Cross & the Sword
by Jean Stern