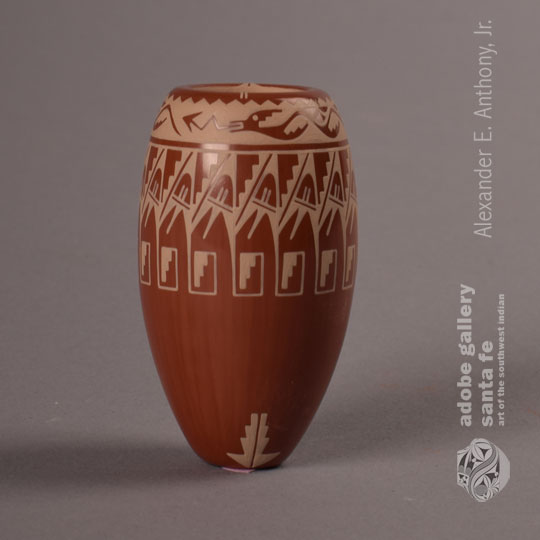 The designs on this Polished Red Santa Clara Pueblo Tall Cylindrical Miniature Pottery Jar are traditional Tewa matte-painted designs over a polished red slip. The field is divided into two major bands. The upper band, nearest the neck, is an Avanyu (water serpent) encircling the neck; the lower band is comprised of a series of rectangular elements that are bird-like in style.  Additionally, there are two arrows at the base pointing downward and two small lines painted on the rim as an extension of the color of the inside rim.

Dolores Curran (b.1954) is originally from Santa Clara Pueblo, but has lived at Ohkay Owingeh Pueblo since her marriage a number of years ago. She works in miniature scale and has done so since first making pottery at the age of 9. She does not maintain a record of designs because, as she states, she doesn’t want to repeat her designs. Each piece of pottery is unique. She creates the design for each piece as she works on it.

This jar is truly a masterpiece. Each element was designed and painted to perfection. Dolores is a master at working in small scale. She works slowly and achieves perfection in every piece she makes.

Provenance: Originally from the estate of Frederick Boen Tiwas Oei of Santa Fe in 2010.  Now from the collection of a client from Virginia to whom we sold it in 2010.

Recommended Reading: Miniature Arts of the Southwest by Nancy Schiffer