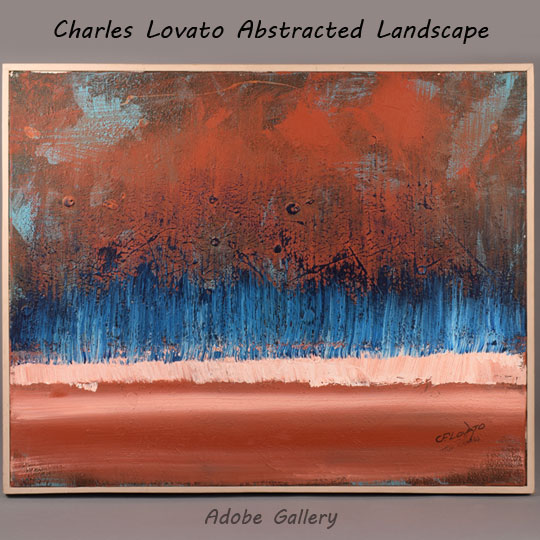 This untitled original painting was created by Charles Lovato of Kewa Pueblo. Though it’s certainly open to interpretation, the piece looks to us like an inventively designed forest landscape. We see a thick cluster of aspen trees lining the edge of an open field. The viewer stands in the field, gazing toward an intricate web of bark and leaves. With this image, Lovato used compelling textures and unusual colors to invite us into the world as he saw it.

Soft pinks and whites over a rich brick red form the earth down below. A wide band of bold blue forms the cavernous space that is the forest—not the trees themselves, just the darkened space beneath the canopy of leaves. White streaks move up from the earth down below to form the tree trunks, while the brick red from down below reappears to create massive clouds of autumn leaves. We’ve handled quite a few of Lovato’s paintings in the past, but we’ve never seen one quite like this imaginative, beautiful landscape.

The canvas is mounted within a frame, which is painted gray. It is signed CF. Lovato, dated ‘71, and marked “For Ricardo.”  Ricardo was the original owner of the painting.

Charles Lovato (1937-1988) of Kewa Pueblo (formerly Santo Domingo) was a man of many talents—painter, muralist, illustrator, poet, and craftsman. His paintings were unique, and largely unrelated to Pueblo traditions. As a jeweler, Lovato made heishe (shell) necklaces, for which the Santo Domingo Pueblo is well known.  At an early age, he was adopted by his grandmother, Monica Silva, who was a potter. He served in the U.S. Military. He also studied art under Jose Rey Toledo in Santa Fe.  After 1967, many of his paintings were accompanied by one of his poems. He explained that sometimes the poem came first, and sometimes they were written in response to the painting.  Charles Fredric Lovato died in 1988 at Kewa Pueblo in New Mexico.

Provenance: this Charles Lovato Abstracted Landscape dated 1971 is from a private Santa Fe collection, originally obtained directly from the artist