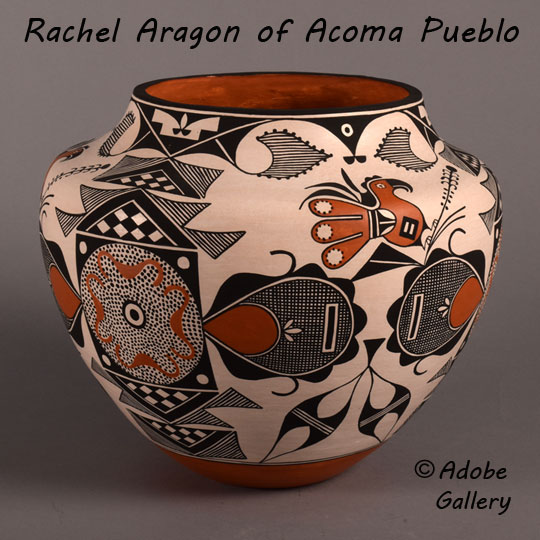 This polychrome olla was created by Rachel Aragon of Acoma Pueblo.  It is a well-made vessel with a balanced shape and an appealing design pattern. At its shoulder, the vessel makes a strong, sharp turn inward before reversing its course and settling into a soft circular curve up to the rim. Aragon selected the traditional combination of black and orange pigments over a crisp white slip for this piece, creating a spirited design that feels well-suited to the vessel.

The exterior features a design pattern that repeats three times. At its center, a circular design sits within a rectangular form. Triangular checkerboard patterns emerge from its top and bottom, repeating in smaller variations closer to the rim and base. Rounded forms burst outward from its sides. More triangles appear, serving as bridges between each rounded form and linking the three repetitions of the design into one continuous pattern. Bright orange birds perch on long, flowering stems, augmenting the already lively energy of the more abstract designs.

The bottom of the pot is signed Rachel Aragon, Acoma N.M.

Rachel Aragon (1938- ) is an Acoma Pueblo potter. At the age of 10, Aragon began learning the art of pottery making from her mother, Lupe Aragon. Aragon works using traditional methods and materials, making large, classic polychrome ollas with bold designs of parrots and deer with heartlines. She has received many notable awards for her work, including first and second place at the New Mexico State Fair and second place at Santa Fe Indian Market. Aragon is related to many notable potters, including her sister Mary Trujillo, her cousins Emma Chino and Marie Torivio, and her nieces Carol Loretto and Geraldine Sando.

Provenance: this Rachel Aragon Acoma Pueblo Polychrome OLLA with Elaborate Designs is from a private collection, originally purchased in the 1980s from Palms Trading Post in Albuquerque