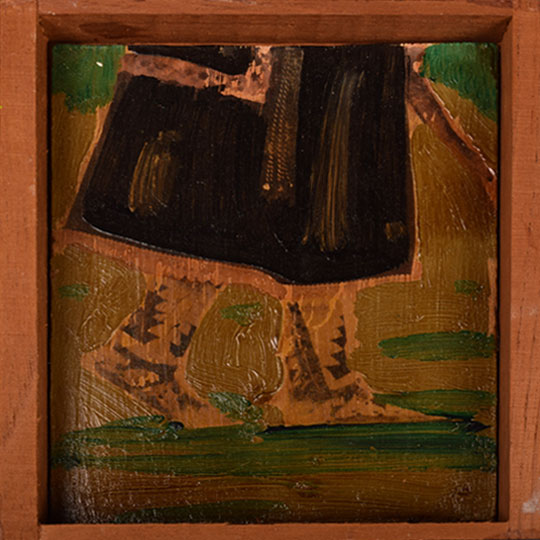 The oil painting by Cochiti Pueblo artist Mateo Romero, featuring the lower portion of a female dancing along in her traditional beige color moccasins, was fitted into a commercial Indios cigar box from Honduras.  Mateo chose the Indios box for such paintings because of its stereotyping Indian imagery. The interior of the lid retains the company’s label. Mateo outlined the wood frame of the lid with white paint.  The top of the exterior of the box was covered with encaustic wax.

When we received this unusual art object that was made by Cochiti Pueblo artist Mateo Romero, we inquired of the artist about its unusual nature.  Mateo responded “I think they were sexy.  Idiosyncratic unexpected views of dancer mocs...indios puros tobacco labels (stereotyping native imagery)...encaustic wax on the outer surfaces.  There were only about 6 of these, maybe a few more but never a lot.”

“Mateo was born in 1966. His father Santiago Romero (Cochiti) was a Santa Fe Indian School teacher and painter. His mother Cornelia was an anthropologist at UC Berkeley.  Mateo grew up in Berkeley, CA and learned to draw by looking at comic books. He says that he started drawing by copying the work of Jack Kirby editions of X-Men.  He left California when he was 18 to attend Dartmouth College. He graduated in 1989 with a BA in Art and went to Santa Fe to attend IAIA for a year of postgraduate work before continuing on to the University of New Mexico where he earned his Master of Fine Arts.” Wheelwright Museum

Condition: this Rare Cochiti Pueblo Art in a Cigar Box by Mateo Romero is in very good condition