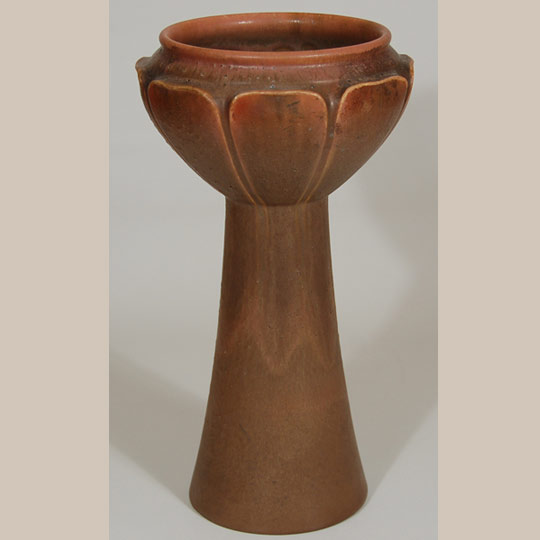 “Rookwood Pottery of Cincinnati was the first to gain artistic recognition and respect for the United States. In 1889, Rookwood was awarded the First Prize Gold Medal at the Paris Exposition Universelle. This was a shock to the international artistic community who had never really paid much attention to American ceramics. In less than a decade after starting as a hobby pottery shop, Rookwood had grown to become a company with an international reputation for ceramic excellence. This recognition forever changed the way the international community viewed American art.

“In 1876, Maria Longworth from Cincinnati attended the Centennial Exhibition in Philadelphia. With over four hundred countries displaying the finest of their ceramic accomplishments, many thought that the American pieces were inferior. At this time, this perception was not unusual. It was generally thought that American art was hundreds of years behind the rest of the world. Especially in ceramics, American art was considered unrefined, made with little talent or technique.

“Inspired by the Japanese designs she saw in Philadelphia, Maria began to dream of changing that perception. Fortunately, Maria was a woman with aspirations and means. The daughter of real estate millionaire and arts patron Joseph Longworth, Maria asked her father to provide the funds for her own pottery. She believed that the key to creating fine art was to create an environment filled with talent, ideas and inspiration.

“Named after the Longworth family estate in Cincinnati, Rookwood became the first female manufacturing company in the United States. She hired a team of famous artists, talented art students and glaze technicians and encouraged them to exchange ideas. Most importantly, she encouraged her employees to be creative, to try new subjects, new techniques and new mediums. Whatever inspired them to create fine art.”  Rookwood Pottery website

The tall and elegant stem of this vase erupts in a bursting flower, the petals of which are gracefully expanding.  The vase is beautiful brown tone with highlights of a red undercoat.  On the underside are an artist logo and the number 1665.  We have not yet determined the date it was made or the name of the artist.

Condition: this Rookwood Ceramic Flower Vase is in excellent condition with what may be two small professional repairs on the upper edges of two flower petals. 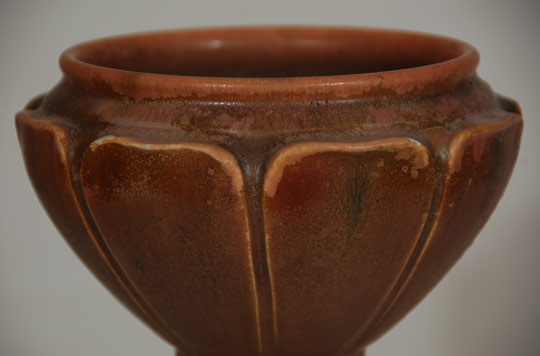 What is wrought in the Craftsman workshops: A brochure published in the interests of the Homebuilders Club (SOLD)
by Gustav Stickley

Gustav Stickley After 1909: Featuring the Rare 1909 Catalogue of Craftsman Furniture and Safecraft (SOLD)
by Stephen Gray

Arts and Crafts Furniture: Shop of the Crafters at Cincinnati (Mission Furniture Catalogues Series, No 7)(SOLD)
by Stephen Gray