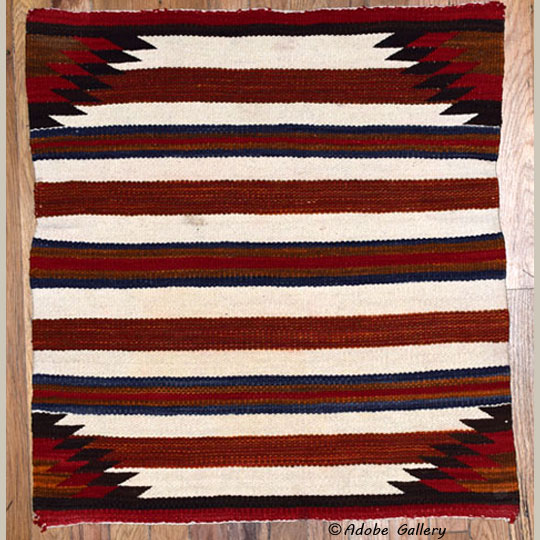 One of the earliest textiles woven by the Diné was the saddle blanket. Along with wearing blankets, it is one of the few textiles woven for their own use. Eventually, it became popular with cowboys because of the thick weave and the size that permitted the blanket to fold over for double thickness. By the late 1800s, the Navajo economy was quite dependent on sales of their textiles. Rugs for Easterners were being encouraged by traders and the women responded by making textiles of the style and size convenient for use as rugs. Weaving rugs was more profitable than weaving saddle blankets, so that is where the effort was settled. Saddle blankets were still needed for use by the Navajo and cowboys, but weavers made them when required, as the financial return was minimal.

The pattern consists of two-inch banded strips of varying colors. One group is bordered with a deep blue yarn with bands of burnt orange and red yarns. Alternating strips are single rows of red and burnt orange yarn in alternate positioning. These band styles alternate throughout the textile. The four corners feature diamond shapes composed of brown, red, and burnt orange. It is the corner designs that were derived from the Third Phase Chief Blanket style.

To quote Lane Coulter, author of Navajo Saddle Blankets: Textiles to Ride in the American Southwest:

"Navajo saddle blankets are among the most underappreciated art forms in the American Southwest, the Cinderella of Navajo textiles. Saddle blankets have played a key role in Navajo life both as utilitarian objects and as a force in the economic sustainability of modern Navajo life. They represent a material link between Navajo weavers and traders. This modest textile has found a context in the cattle industry, inside rural cabins, on the floors of eastern bungalows, on the walls of art museums, and even on horseback. It has served countless cultural and utilitarian demands placed on it over the last century and a half, with no sunset in sight."

This saddle blanket is of a single size, not intended to be folded over for use on a horse, but to be displayed fully open as a work of art. It was designed in the style of what has been named "Chief Blanket"—a name derived from the popularity of that design by Plains Indians. They were prized by members of those tribes and were so costly that it was assumed that an Indian who could afford one must be a Chief.

Provenance: this Navajo Saddle Blanket Modeled After Third Phase Chief Blanket is from the collection of a gentleman from California