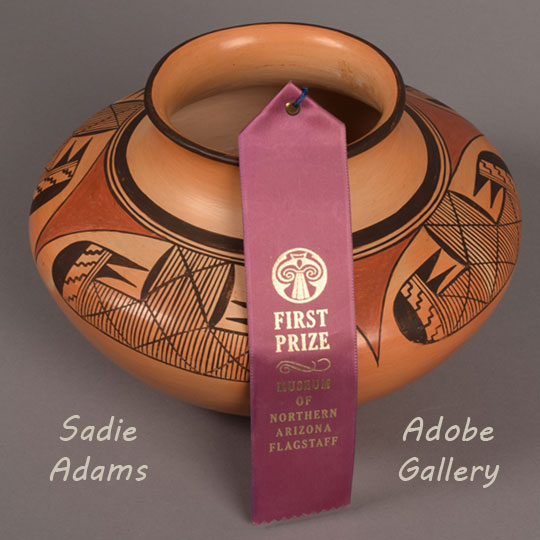 Hopi Pueblo artist Sadie Adams has provided something spectacular with this jar.  Olla-esc in shape, it resembles a traditional water jar with a contemporary twist: it is wider than it is tall.  It is substantial in both size and weight, which makes it stand out from not only the artist’s body of work but much of the entirety of the contemporary Hopi pottery pieces, as well.

As can be seen with other Hopi pottery, the seemingly magical clay blushes organically through the entire surface of this jar in its celebrated pallet of oranges.  A fire cloud lays hidden at the base.  The top lip of the jar is rimmed in dark brown followed an inch and a half down by three similarly colored rings, the first much thicker than the following two.  These circles give way to red triangles, creatively staggered between four pictorials, one on each side of the jar.  A feminine and geometric version of the ancient Sikyatki style abstractly guides the pictorials, leaving those who behold the jar to decide for themselves what they believe them to be.

Sadie Adams' (1905-1995) Hopi name is Flower Girl (Flower Woman) and she signed her pottery with a flower symbol.  She was a Hopi-Tewa of the Kachina/Parrot Clans and lived in the Tewa village at First Mesa on the reservation.  She won awards for her pottery and her work is exhibited at the Museum of Northern Arizona in Flagstaff and the Heard Museum in Phoenix, Arizona. This jar is adorned with its original first place ribbon from the Museum of Northern Arizona, Flagstaff, dated July 1965 and with a price at the time of $27.50.

She was recognized by collectors and her contemporaries as an outstanding potter.  She had a long, successful career making and selling pottery on the reservation and supported her family in this manner following the death of her husband.   She supported her family solely from sales of her pottery, even sending her daughter to nursing school.

She was very versatile in the pottery she made—jars, bowls, lamps, tiles, cookie jars, plates, cups, and saucers—that it is no wonder that she has such large collector enthusiasts today.  She made something for everybody's budget and desires.  The jar is signed with the potter’s flower hallmark.

Condition: This jar is nearly in its original condition, it is excellent

Nampeyo And Her Pottery [Paperback Edition]
by Barbara Kramer