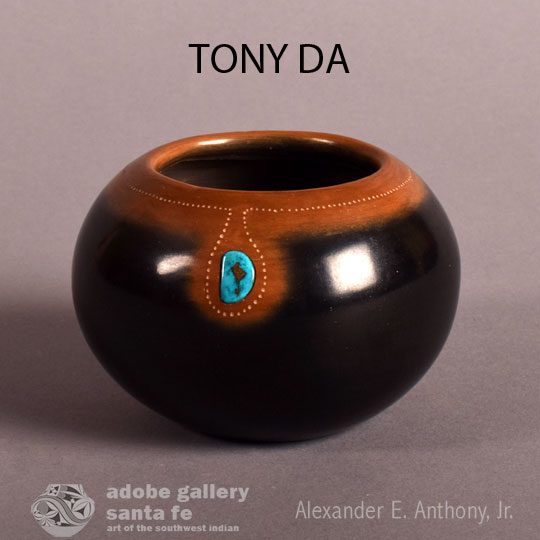 This San Ildefonso Pueblo pottery jar by artist Tony Da was coil built, polished, etched and fired black through a reduction firing, and then re-oxidized for the sienna upper part.  The entire surface was fully stone polished, the dots were impressed, a section was cut out for the turquoise gemstone, then the jar was fired. After the firing, the turquoise was set in place.  The jar was signed DA on the bottom of the jar, cut into the clay.  Tony chose a turquoise gemstone with a copper matrix as a compliment to the sienna surrounding it.

Tony Da began to learn the techniques of pottery production from Maria when he moved into his grandmother’s house in 1966.  His earlier pottery was mostly redware bowls or jars with an Avanyu as the prime theme of decoration. There was no turquoise or hieshe in the earlier works.  It is my understanding that Tony’s dad, Popovi Da, fired all of Tony’s black pottery.

This jar probably dates to 1970.  The workmanship is exquisite, consistent with his progress in those few years of instructions from Maria.

Tony was destined to become one of the finest artists of the twentieth century. His grandparents, Maria and Julian Martinez, and his father, Popovi Da, were skilled artists. Tony was a painter from early in life, and was winning awards for his paintings. A change occurred when he moved in with his grandmother. She taught him the techniques of pottery making and he learned very well. Within three years, Maria said he had nothing else to learn from her.  One would expect Tony to produce pottery in the traditional style taught him by Maria but he was too creative to do so. He followed his own ideas and became a world-famous potter by doing so.

Tony only had a 12- or 13-year career as a potter before his devastating motorcycle accident in 1972, an accident that ended his pottery career.  In that dozen years, he created many masterpieces and received world recognition. Very few artists can claim such fame in a dozen years.

- From the collection of a gentleman from Illinois.

Recommended Reading: The Life and Art of Tony Da by Charles S. King