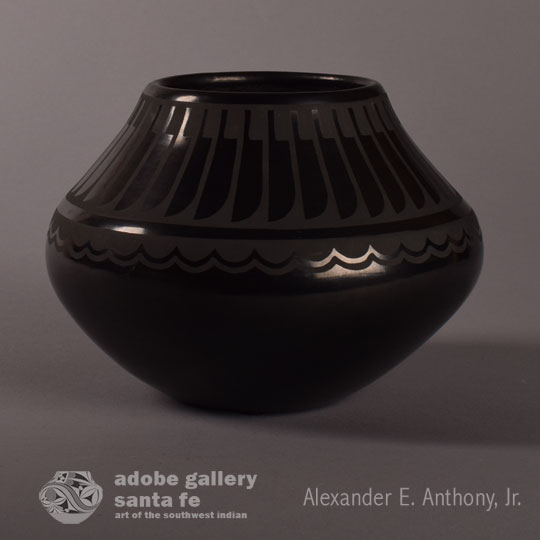 This traditional San Ildefonso Pueblo Black-on-black pottery jar was made by Maria Martinez with the assistance of her son, Popovi Da, in February 1970. It is signed and dated on the underside.

The long and sloping graceful neck is filled with adjacent eagle feathers extending from the rim to the shoulder.  Below the neck design is a dual band of rain clouds. It is the combination of the two design concepts that elevates this jar above many of the same time period.  This jar was completed during the last year of Popovi Da’s life and the end of the career of Maria. Popovi Da (1922-1971) began collaborating with his mother, Maria Martinez (1887-1980), on her pottery in 1956, following a period when Santana (married to his brother, Adam) had been assisting her mother-in-law.  Popovi and his mom worked together until his death in 1971. Popovi worked with Maria in all aspects of pottery preparation and their pieces were co-signed. When Popovi passed away, Maria essentially retired. Popovi initiated the process of adding the date to his and Maria’s pottery in 1959. Prior to that, they were just co-signed with the two names.

Maria’s sister, Clara, spent most of her adult life polishing pottery for Maria.  Clara was deaf so Maria supported her with this work. It is quite likely that Clara polished this jar, then Popovi Da painted the design, which, incidentally, is flawless.  Popovi was a perfectionist in his work and that is quite evident in this jar. It is a beautiful jar with a highly reflective burnish.

Provenance: from a gentleman from New Mexico