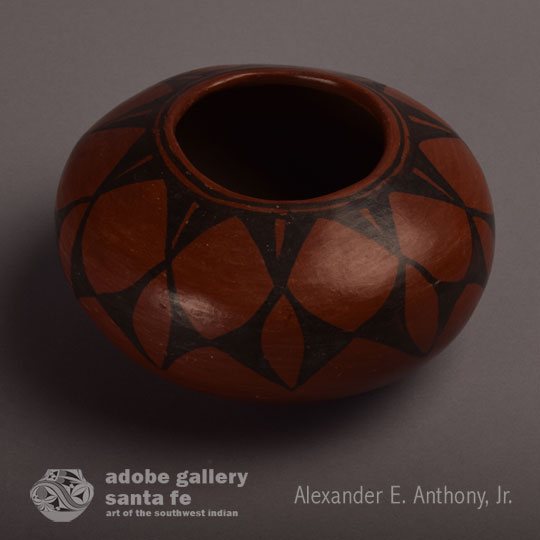 This San Ildefonso historic pottery jar by Tonita Roybal was first slipped from top to bottom with red clay, then a design in black pigment was applied on the red. A clever arrangement of black triangles was used for the design.  The jar is certainly the work of Tonita Roybal but the signature on the underside is mostly abraded away. It most likely dates to the 1920s.

Tonita Martinez Roybal (1892-1945) has been acclaimed to have been one of the finest potters of the twentieth century. She was a contemporary of Maria Martinez and sometimes collaborated with her.  Roybal, in her early years, not only made all her own pottery, she decorated it as well. Only after she married Juan Cruz Roybal in 1916 did she have someone else paint pottery for her. After 1930, her husband painted most of her pottery.

Tonita was the daughter of Dominguita Pino Martinez (1860-1948).   Her mother was her teacher. Dominguita is well known for making black-on-red jars and likely influenced her daughter to do the same.  Tonita’s brother was Crescencio Martinez, a famous San Ildefonso painter, known for easel painting as well as painting his mother’s pottery.

Tonita was an expert in shaping vessels. This somewhat rounded gourd-shape jar is one of the shapes she produced so elegantly.

This piece is pictured on page 147 of Allan Hayes and John Blom's Southwestern Pottery: Anasazi to Zuni.

Condition: minor exfoliation and abrasions to the slip

Provenance: this San Ildefonso Pueblo Black on Red Historic Pottery Seed Jar by Tonita Roybal is from a gentleman from Santa Fe