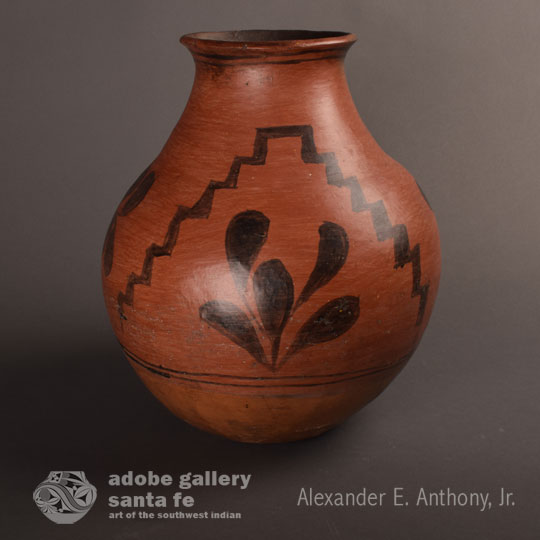 Dominguita Pino Martinez was known for making Black-on-red San Ildefonso Pueblo pottery such as this jar.  Early in her career, she experimented with vessel shapes reminiscent of earlier Tewa jars. This tall jar with a globular body is such an example.  “Black-on-red has long been recognized as a San Ildefonso type, dating as early as the mid-nineteenth century.” Batkin 1987:39

Dominguita Pino Martinez (1860-1948) was the mother of Crescencio Martinez, Alfonsita Martinez Roybal, and Tonita Martinez Roybal, and the grandmother of Awa Tsireh.  “She was known to have collaborated with different painters. She lived in a small adobe house, one of the oldest homes in San Ildefonso. There used to be a sign in front of her house that read, ‘Old Grandmother's House.’ Santana Martinez recalled living in this house to biographer Susan Peterson.”  Schaaf 2000:190

Jonathan Batkin published an article “Three Great Potters of San Ildefonso and Their Legacy” in American Indian Art Magazine in 1991.  Dominguito Pino was one of the three potters chosen. She and her daughter, Tonita Roybal, were highlighted as famous for their Black-on-red wares.

The elegance of this jar is its tall and commanding vessel shape, perhaps influenced by Powhoge Polychrome wares of earlier times.  Dominguita is known for having experimented with such a shape in 1905. The design is a simple multiple leaf plant under a stepped arch, a design that does not detract from the vessel shape.

It is no wonder that Batkin chose Domguita as one of three great potters of San Ildefonso Pueblo.  She deserves such recognition.

There was a potter from Zia Pueblo whose name also was Dominguita Pino who was active from the 1930s to the 1970s.  Dominguito Pino of San Ildefonso was an active potter from 1880 to 1948. We mention this to allay any confusion between the two Dominguito Pino artists.

Provenance: from a gentlemen in Santa Fe