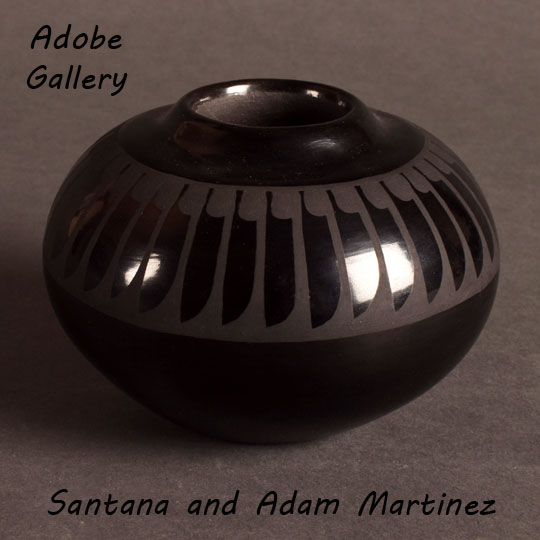 San Ildefonso Pueblo artist Santana Martinez is best remembered as a pottery collaborator with her mother-in-law Maria Martinez, painting the designs on Maria's pottery after Maria's husband Julian passed away. Santana and her husband Adam also collaborated on pottery. Santana made the pottery and painted the designs. Adam did the firing of their pottery. Adam surely was the one who gathered the clay for Santana and he almost certainly did all the clay processing.

Santana did not put Adam’s name on their pottery in the early days but, then, someone said they saw a Santo Domingo jar with the name Santana on it, so Santana decided to add Adam’s name to prevent confusion between their work and the work at Santo Domingo Pueblo.

This jar is in the shape of a traditional storage jar.  The traditional eagle feather design surrounds the upper half of the vessel.  This is a design that Julian discovered in a Mimbres bowl and the family used it on the black pottery. The jar dates to circa 1970 and was originally purchased from Quail Hollow Galleries in Oklahoma City.

Provenance: this San Ildefonso Small Pottery Storage Jar by Santana and Adam Martinez is from a gentleman in Santa Fe

To Touch the Past: The Painted Pottery of the Mimbres People [SOLD]
by J. J. Brody, et al.