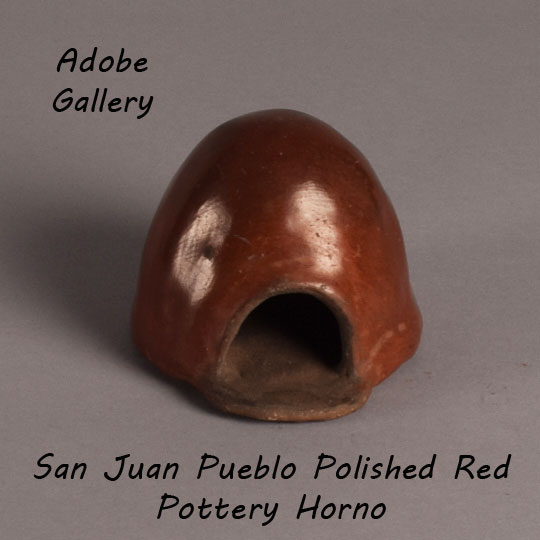 The first Indian Fair, now the Santa Fe Indian Market, was in 1922.  It was probably at that time that potters began making small pottery items that a visitor could take home.  Small bowls, jars, and figurines would have been popular.  Items that were uniquely New Mexico were popular, such as this horno.  It would have provided the potter with something to explain to a tourist, as it is not likely that a visitor would have ever seen a horno in real life.

We have designated this horno as having been made at San Juan Pueblo in the early 1920s.  It has that beautiful deep red slip seen on early San Juan Pueblo pottery.  The underside is polished tan natural clay.  The piece was not signed with the name of the potter.  It would have been a typical marketable item at the Indian Fair.

This horno is among several pottery items that were collected by Mary Louise Mark of Westerville, Ohio.  Ms. Mark (1878-1972) was a Professor of Sociology and Statistics at Ohio State University.  She acquired most of her collection during her participation in 1927 on a “Survey of the Conditions of American Indians” sponsored by the Institute of Government Research (later known as the Brookings Institute.)