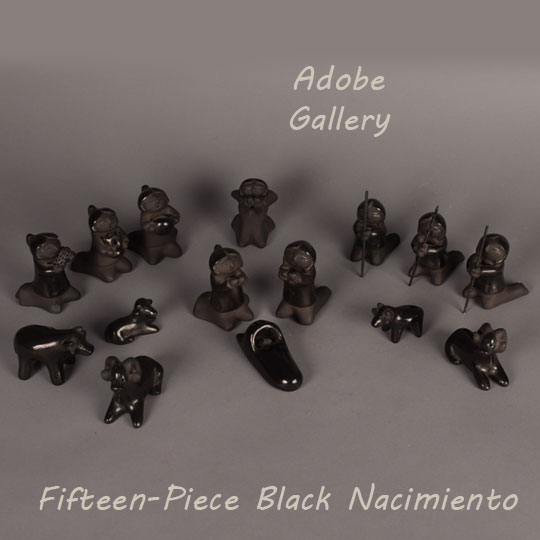 This fifteen-piece Santa Clara Pueblo pottery nacimiento set was originally purchased in 1985 by the current owners.  It is one of the largest, in number of pieces, that Paul and Dorothy Gutierrez made.  Of course, Mary, Joseph and baby Jesus are the highlights of the set. All three display a combination of highly polished finish and matte finish.  The kneeling angel has hands clasped, head slightly tilted back and with stone polished hair.  The three kings carry gifts of a wedding vessel, a bowl, and an ear of corn.  There are three shepherds, a pair of rams, a cow, and a pair of sheep.

Paul and Dorothy Gutierrez are a husband-and-wife pottery making team living at Santa Clara Pueblo. They are specialists at making figurative pottery.  Dorothy models the clay and Paul does the sanding and polishing.  Paul is the grandson of Lela and Van Gutierrez and the son of Luther Gutierrez, (of Margaret & Luther fame), all of Santa Clara Pueblo.

Dorothy is Diné and has been an active potter since the 1970s.  When she first began making her clay figures in 1971, she had expert instructions from Margaret Gutierrez, Paul’s aunt.  “During her first year Dorothy made ten Nativity sets, along with many miniature buffalos, beavers, bears, and wedding vases.  Since 1972, when she began entering her work in competitions, she has been winning awards at all the major shows in the Southwest.  In 1975 her seventeen-piece blackware Nativity won First Prize in sculpture at the fall Indian crafts show at the Deer Dancer Gallery in Denver.  At the 1976 show, one of her miniatures redware Nativities took Best of Show in the contemporary category, and she has won the top awards every year since.” [Monthan,1979:67]

Provenance: this Santa Clara Pueblo Fifteen-Piece Black Nacimiento by Paul and Dorothy Gutierrez is from the collection of a family from Pennsylvania