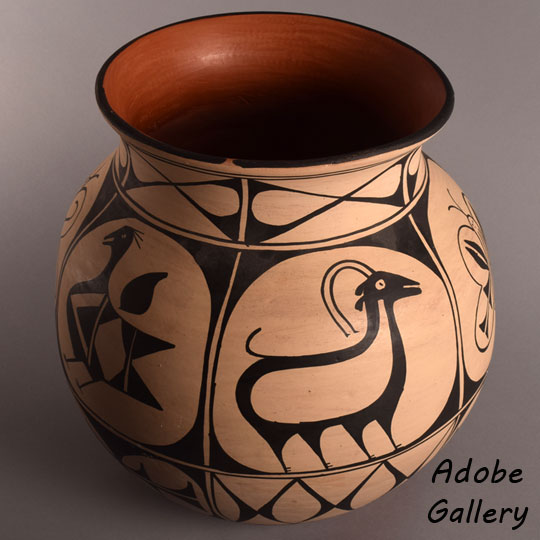 This large jar was created by Santo Domingo Pueblo artist Vidal Aguilar.  The artist’s works are in some ways indebted to those of his influential ancestors Felipita Aguilar Garcia and Asuncion Aguilar Caté.  He moves in his own direction by adding figural designs, and expanding the size of his pieces beyond that of the typical pueblo water jar.  We appreciate pueblo artists like Vidal Aguilar, who create unique works using traditional materials and methods.

Aguilar covered the majority of this large jar’s exterior in bold black-on-cream designs.  Three horizontal design bands appear.  These bands are split vertically into six different sections.  Within the central band of each section, an animal appears.  Two butterflies, two birds, and two antelopes comprise this group of six animals.  Subtle variations in form appear in each pair, giving the viewer much to admire.  The traditional red slip appears for just a few inches at the jar’s base.  It also covers the entirety of the jar’s interior.

The bottom of the jar is signed “Vidal Aguilar, S.D.P.” and marked with a plant symbol.

Vidal Aguilar (1972 - ) is a member of the famous Aguilar family of Santo Domingo Pueblo potters.  According to Gregory Schaaf’s Southern Pueblo Pottery: 2,000 Artist Biographies, “Vidal Aguilar makes some of the largest polychrome ollas at Santo Domingo in the Aguilar family tradition.  His pottery is hand coiled and polished.  His black paint is a mineral pigment used centuries ago, rather than the typically used Guaco or Mountain Bee plant. His red and white paints are natural clay.  He fires his pottery in a pit.”

Provenance:  this Large Kewa Pottery Jar with Animal Designs by Vidal Aguilar is from the large collection of an Albuquerque family