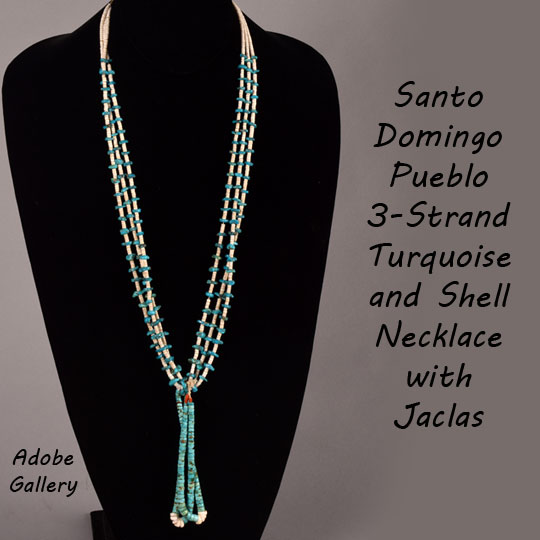 This Santo Domingo Pueblo Three Strand Necklace with Jaclas is typical of those from the mid-1950s by artisans from Kewa Pueblo.  The white shell heishi was formed from seashells which were cut into small squares, drilled with a hole, strung on string and then sanded by hand to produce round beads of uniform size.

The heishe was then restrung with small turquoise gemstones which were drilled and inserted.  The three strands were tied together and bound with string in pueblo fashion. A pair of turquoise jaclas is suspended from the necklace, and small glass beads are attached to hang behind the neck.  The necklace is strung on woven string.

This style necklace is centuries old.  Archaeologists discovered caches of turquoise and shell necklaces at Chaco Canyon, evidence that the ancestors of today's Pueblo people were using turquoise nuggets and shells as items of adornment over one thousand years ago.  And from the earliest of times, turquoise has been favored by the Pueblo Indians of the Southwest. They mined it at Cerrillos, about 30 miles south of Santa Fe, for centuries. Turquoise had religious, ceremonial, superstitious and economic values to the Pueblo Indians.

Heishe, made from seashells, such as used in this necklace, is constructed in a most interesting manner. The shell is cut into small squares, drilled, and strung on a cotton string, then slowly and meticulously rolled over sandstone until each piece is round and all the pieces are of the same diameter or graduated diameter, if desired. Cotton is used because it is softer and doesn’t wear against the shell too abrasively. The turquoise tabs that are added to such a heishe necklace are drilled, often off center, and strung with the heishe to form an interesting necklace.

Throughout this three-strand necklace are nuggets of various types of turquoise. The turquoise pieces are of different sizes, shapes and colors creating an amazing assemblage where it provides a different appeal every time it is viewed. The turquoise nuggets are small and variously shaped.

A pair of jaclas is suspended from the bottom of the necklace. Jaclas are composed of two loops of turquoise and shell strung individually and then tied together in a fashion by which they can be hung from a nugget necklace.  Originally, in the 19th century, each of the units was made for use as earrings.  When not being worn, they were hung on a nugget necklace for storage.  Eventually, their use as earrings ceased and their use as a pendant on a necklace became permanent.

Historic photographs show necklaces with jaclas hung over the neck of a deer mounted on one’s wall.  When the dancer was not wearing the jewelry, it would then be hung around the deer’s neck.  It is not unusual to see necklaces such as these still being hung around the neck of a mounted deer in a pueblo home.  It is a sign of respect for the deer.

Provenance: this Santo Domingo Pueblo Three-Strand Turquoise and Shell Necklace with Jaclas is from the collection of a resident of Colorado The Allure of Turquoise [SOLD]
by Arnold Vigil