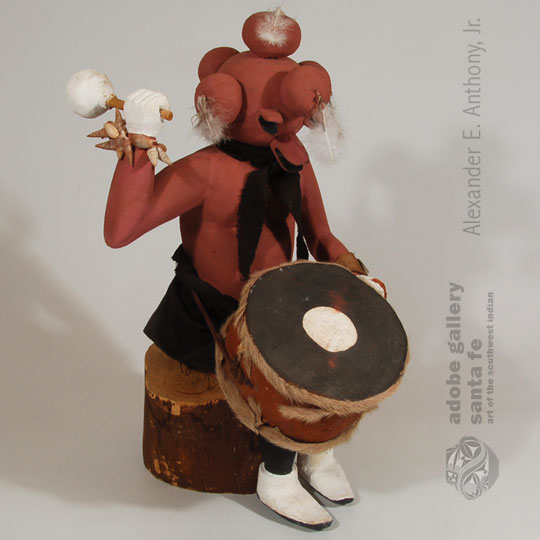 At Hopi, he is a curer, magician, dance director, warrior, messenger, sage or even a fool.  He also may appear in the guise of any katsina by donning the clothing of that katsina. The Koyemsi appear as interlocutors between katsinas and humans. They serve religious and secular functions. They function as chiefs and as clowns at various times. They are probably the most popular and recognized of all masked dancers. They appear in almost every ceremony as clowns, drummers, announcers of dances, and many other roles.

The carver of this doll has shown him as a drummer, one of the functions he performs occasionally.  He is seated on a log, has a drum on his lap, secured with a strap around his back, and has his hand raised ready to pound on the drum.

Since the doll is not signed with the name of a carver, we cannot attribute it to any individual.  The original price on a sticker on the underside is $90, an indication of an early date by which it was made, perhaps 1940s or 50s. Those dates coincide with the date Popovi Da opened his Popovi Da Studio of Indian Arts at San Ildefonso Pueblo.

Provenance: This was in inventory at the Popovi Da Studio at San Ildefonso Pueblo at the time it was permanently closed.  Passed through the family to a granddaughter of Popovi Da from whom we received it. 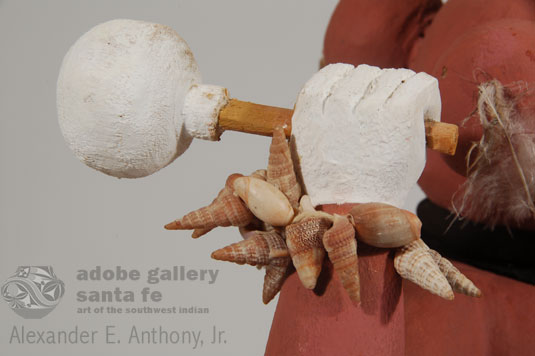