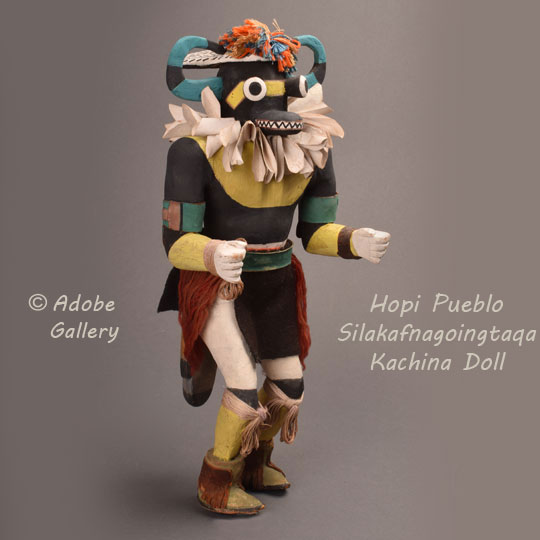 Tuwalakum Katsinas may be called either guards or warriors. This Silakafnagoingtaqa Kachina Doll is part of Tuwalakum group.  When the Hopi Pueblo Katsinas appear individually they function more as sergeants-at-arms or policemen. In this role they either enforce an action such as the communal cleaning of springs or as a guard to prevent the approach of anyone or anything to the proximity of a location or ceremony. However, with the passing of years many of these functions have been lost as springs are converted to water systems and trails or roads become the province of highway departments.

This Hopi Katsina doll is one of the guard Katsinas and he functions like all other guards or whippers. He has been seen numerous times at Powamuya making war on the clowns in the summer dances. He appears on all three mesas. -Personal Communication

When they appear as a group such as in the Powamuya Procession or during Pachavu times they are functioning as warriors. They surround the more sacred katsinas as a small but ferocious army of fearsome creatures. From these actions comes their name Ichivota or Angry Katsinas or, as they are often called, the Watching Katsinas.

Many of the Guard Katsinas carry yucca whips which are indicative of their roles as warriors, protectors, and overseers. In some instances, such as with the fearsome warrior Hé-é-e, the Guards may serve to protect certain ceremonies from the potency of other katsinas. [Wright 1977]

Provenance: this Hopi Pueblo Guard Katsina, Silakafnagoingtaqa Kachina Doll is from a very large collection of katsina dolls from a family from Oklahoma