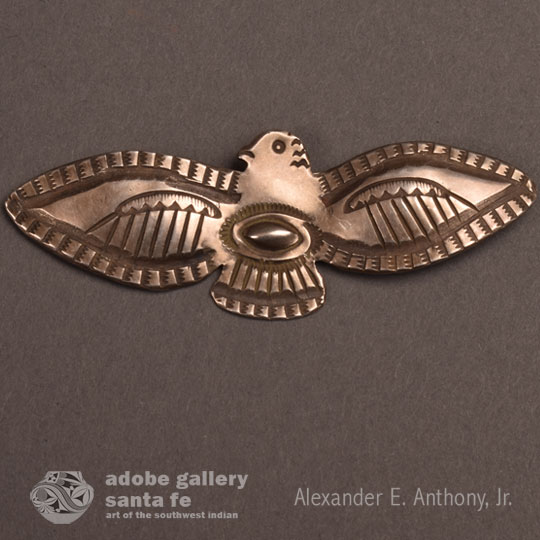 This Navajo silver ornament is widely known as the Thunderbird in spite of the fact that the Thunderbird is an unknown factor in the mythology of the Southwest. The image of the Thunderbird is explained by Arthur Woodward in his book A Brief History of Navajo Silversmithing: “Among the most familiar pendants and pins manufactured within recent years by Navajo smiths are those representing a bird with outspread wings.

Hermann Schweitzer, of the Fred Harvey Company’s curio department, demanded only the best for the Fred Harvey gift shops. This silver thunderbird pin was made in the fashion of what Hermann Schweitzer demanded from silversmiths.  A very skillful Diné artist used a series of small sawtooth shaped stamps to create the illusion of the feathers of the wings of a bird. The fine stampwork is reminiscent of work by Diné silversmiths at the beginning of the 20th century.

“On the other hand the bird figure is commonly seen in prehistoric pictographs, on ancient and modern pottery and is prevalent in the mythology of the Puebloan and Navajo tribes.

“The current story connected with the so called ‘Thunderbird’ pattern is that this particular design was first noted by surveyors for the Santa Fe railroad near Scholle, New Mexico. The discovery of a number of beautifully executed pictographs in polychrome was relayed to the office in Albuquerque and copies were made of the various figures.

“The bird figure was ultimately adopted by the railroad as a trademark and in turn the curio shops along the line began selling silver replicas of the bird. It was termed a ‘Thunderbird’ mainly through ignorance.”

This thunderbird pin is unsigned.

Condition: This Silver Thunderbird Navajo Jewelry Pin in the Fred Harvey Style is in excellent condition.