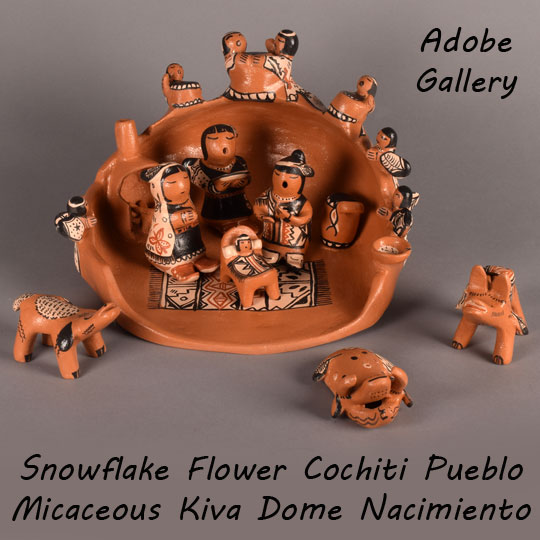 This is a one-of-a-kind large kiva dome Nacimiento set created by Snowflake Flower of Cochiti Pueblo.  There are two elements that make this Nacimiento different from any other: the kiva dome setting with attached features and the micaceous slip. The kiva dome attached features include a horno oven, four drummers, three angels, a prayer bowl, and a painted rug. The separate pieces include a mother, father, baby, angel, drum, sheep, donkey, and praying cow.

The mother is swathed in a beautiful shawl ornamented with flowers, eyes closed, and hands drawn together in prayer.  The father sits with his hands out and mouth open in song or verbal prayer, himself.  The baby is propped up under a sweet small textile in his crib.

The angel sits thoughtfully with a prayer book in hands, mouth open joining the father in song or prayer.  Both the donkey and sheep are standing with eyes closed, mouths open, while the cow is lower to the ground, eyes closed, and hands brought together in prayer.

Snowflake Flower placed prayer feathers on each of her figurines, something she started doing in 1983 when her daughter fell into a coma.  She continued to put feathers on the figures as a prayer for her recovery, hopeful that prayer would spread as people purchased her pottery.  Finally, 16 years later, her daughter awoke from the coma.

Stephanie Rhoades (1931-2018) Snowflake Flower specialized in handmade storytellers and clay sculptures. She dug her own red clay and white sand from a sacred ground within the Cochiti Pueblo. She then combined the sand with the clay and hand shaped her sculptures. Immediately after this process the pottery was left out to dry, whereupon she sanded the rough edges with sandpaper. She typically used a natural white slip and paint made from the red clay, however this Nacimiento differs in that the slip is most likely where the micaceous element has been included. Wild spinach provided the black paint used on her pottery. She fired her pottery the traditional way, outdoors, with cedar wood chips and cow manure.

Provenance: this Snowflake Flower Cochiti Pueblo Micaceous Kiva Dome Nacimiento is from the collection of a family from Santa Fe who purchased it in 2010