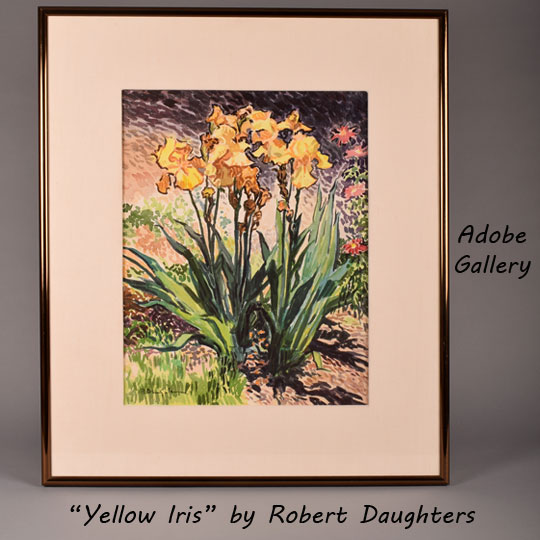 “Yellow Iris” is an original watercolor painting by Robert Daughters.  We’ve listed a handful of Daughters’ works over the years, the majority of which were oil paintings.  It is a treat to be able to take a close look at a watercolor from this world-renowned artist, and it is no surprise that it is similarly excellent.  Daughters’ oils are beautiful snapshots of the Southwest seen through a uniquely dramatic lens.  It would be accurate to describe “Yellow Iris” the same way.

Daughters’ subjects stand up tall, occupying the majority of the image.  Their stems and leaves reach up and spread outward, forming the most grounded and realistic element of the image.  Elsewhere, the scene becomes more expressive.  Yellow petals, with touches of orange and brown adding depth, open up in all directions.  In the background, pale pink turns into bold purple as the viewer’s eye crosses the image from left to right.  These purples and pinks spill down over the ground beneath the flowers, creating balance within the variety of tones used here.  The strength of these colors and the energy of the background are similarly tempered by the gentle delicacy of the watercolors.

The painting is signed R. Daughters in lower left.  It is framed in a thin metal frame under a wide fabric mat.