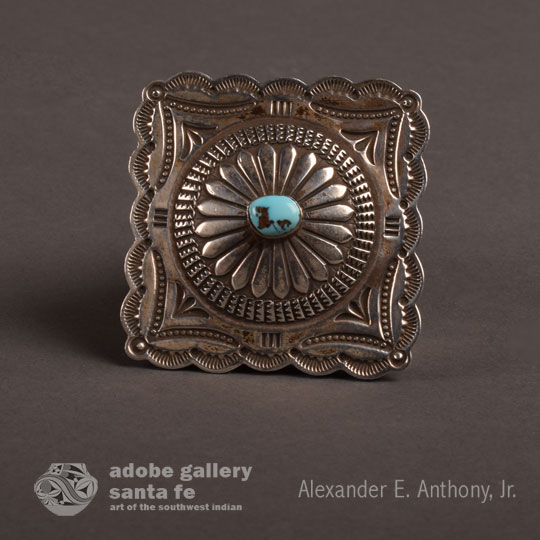 Classic Diné stampwork by award-winning Diné artisan Daniel (Sunshine) Reeves is the highlight of this extraordinary sterling silver trinket box. Reeves, who is well known for his intricate stampwork and unique forms, has created a perfectly shaped small box. The construction of silver boxes requires considerable skill on the part of the silversmith. The silver must be cut, shaped and soldered with precision in order for the lid to fix snugly. Reeves has mastered the technique of designing and assembling a variety of silver objects. He was awarded Best of Show at the 1997 Indian Market in Santa Fe for a sterling silver eight-piece coffee service.

This box illustrates Reeves’ skillful technique in stampwork as well as the fabrication of silver objects. The book Contemporary Southwest Jewelry by Diana Pardue describes stampwork as:

“Stamping is a method of impressing a design in silver by placing a stamp or die on the silver and striking the other end of the die with a hammer to create the design. It is one of the more frequently used techniques of decorating silver jewelry.

“In the 1880s and 1890s, traders in Arizona and New Mexico imported tools for Diné silversmiths that included fine files that could be made into stamps. Stamp work became a frequently employed decorative technique with the introduction of fine files, and silversmiths were making their own stamps by the late 1880s. Silversmiths made stamps not only from files but also from other metal forms, including railroad spikes, car pistons, nails, bolts, chisels, rivets and other useful metal shapes.”

It is Reeves’ stamp work that is the focal point of the box. In classic Diné fashion, he centered a single oval cabochon of gem grade turquoise on the lid. Surrounding the turquoise is a series of stamp designs that have been precisely rendered forming a starburst design. Meticulously stamped crescents frame the central starburst motif.  The artist filled the entire silver canvas with graceful symmetrical shapes. The lid features a carefully cut scalloped edge. The four sides of the box are stamped with a series of triangles. The artist’s name is stamped under the lid. This box is an exquisite example of well crafted traditional Diné silver stamp work.

Provenance: from a gentleman from the Washington, D.C. area

Maisel’s Indian Trading Post Catalog of Charms and Pendants
by

ONE SPACE - THREE VISIONS [SOLD]
by