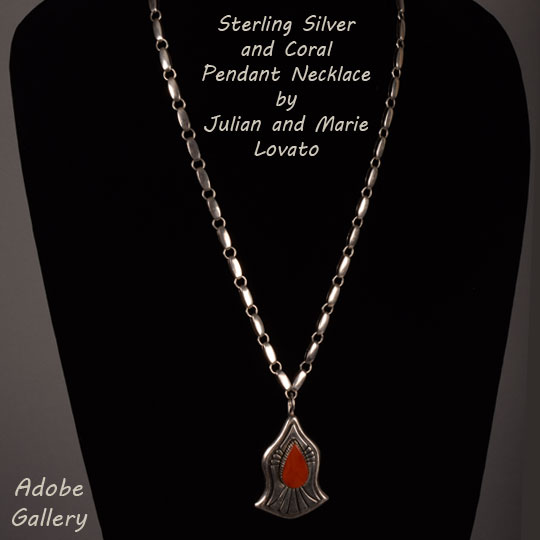 This coral and silver pendant made by Julian Lovato contains a teardrop shaped segment of fine red coral set in a frame of silver. Lovato’s skill in creating heirloom pieces of jewelry is apparent in this piece. The one inch piece of coral rests in a handmade bezel set on a fluid silver setting that is placed on a textured frame. The pendant hangs by a handmade link chain that was made by Lovato’s wife Marie.

Julian Lovato was born at Kewa Pueblo in 1922. His parents and grandparents were jewelers, who worked cutting and shaping turquoise. He began assisting his elders at the age of nine. He joined the military in 1940 and after the war he returned to New Mexico. Lovato was hired to work at Frank Patania’s Thunderbird Studio. His work is some of the finest of late twentieth century Native American jewelry.

This necklace came from the estate of an avid collector of Native American jewelry. The collector kept detailed information about each piece he collected. His records indicate this piece was purchased in 1990 directly from the artist. Condition: excellent condition with minor scratches in the silver from having been worn.

Provenance: this Sterling Silver and Coral Pendant Necklace by Julian and Marie Lovato is from the estate of an Albuquerque couple who were avid collectors of Native American arts and crafts.