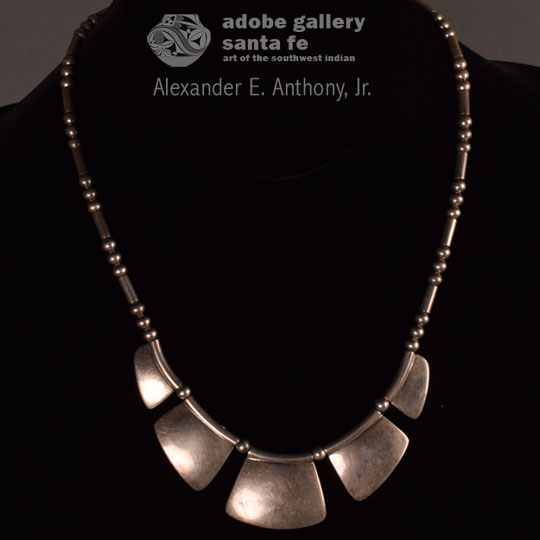 This classic silver necklace made by Frank Patania Sr. has elements of both traditional Native American and European design. The center consists of five highly polished silver tabs that dangle with an elegant symmetry reminiscent of the graceful lines of mid-century Danish Modern jewelry. The tabs are strung with small perfectly fashioned handmade silver beads, both round and tubular, bringing to mind finely crafted traditional Diné necklaces of the early 20th century.

During the mid-20th century, the Thunderbird Shop in Santa Fe was a popular destination for locals and tourists alike. I was not just a gift shop, but was a place where people gathered to catch up on local events as well as to buy gifts. Set on the plaza across from La Fonda Hotel, visitors often included Mabel Dodge Luhan and Georgia O’Keeffe. Frank Patania hired only the most talented and skilled smiths and oversaw their work with exacting precision. The result was a body of work that is instantly recognizable for its quality and style.

This necklace is signed with Patania’s hallmark as well as the symbol for the Thunderbird Shop. Provenance: From a collection in Colorado

Skystone and Silver: The Collector’s Book of Southwestern Indian Jewelry by Carl Rosnek