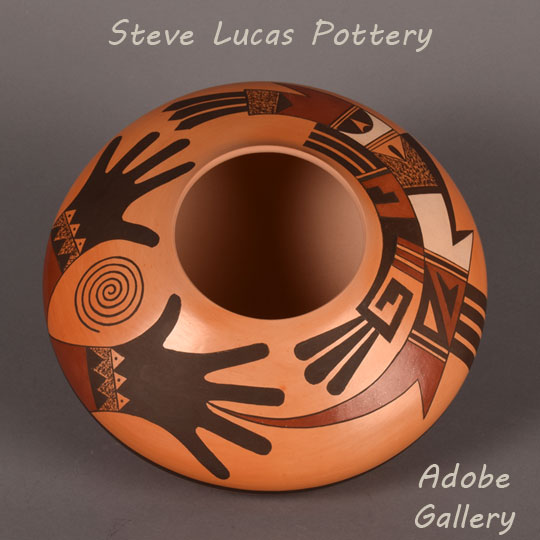 Although this style is recognizable, Hopi Pueblo artist Steve Lucas has made something rare in this extraordinary jar.  The gourd-like shape has a familiar air but is unique in that it comes to a very fine pointed ridge around the jar’s opening, giving this piece a very fresh and crisp feel.  Further adding to this effect are the elements that have been added— the pictorials, shapes and lines—for each has been done with such exactness and care they could not be clearer.

Midway from the base, a thick line has been drawn in dark brown, separating a clear base flushed in the Hopi oranges this clay is known for from the upper pictorial section of the pot. On one side an ancient Mimbres design of spread hands reaches out from this central line. The hands are ornamented in dark crimson and brown blocks, triangles, lines, and yucca-stippled components. Between the hands a thin-lined spiral sits as if conjured by the hands themselves.

Conceptual Sikyátki birds spring forth from the hands and cover the rest of the jar in dark brown, cream, and crimson lines, shapes, and symbols.  Each of the crimson sections has mica added, making it sparkle from any angle. Every aspect of the jar has been polished, beside the dark brown which has been left in matte form.  All these aspects combine to produce a jar which reaches across time—from that of the Mimbres well past the present moment and represents the finest of Lucas’ abilities. Hopi Pueblo artist Steve Lucas (1955- ) is recognized as one of the finest of the younger generation Nampeyo family potters. He is the grandson of Rachel Namingha Nampeyo and the great-grandson of Annie Healing Nampeyo. His mother was Eleanor Lucas. His Hopi name is Koyemsi, the Hopi-Tewa name for the Mudhead Katsina, the clan to which he belongs.

Condition: this jar is in original and excellent condition

Provenance: this Steve Lucas Large Hopi Polychrome Mimbres and Sikyátki Designs Jar came from the personal collection of a family who reside in New Mexico.