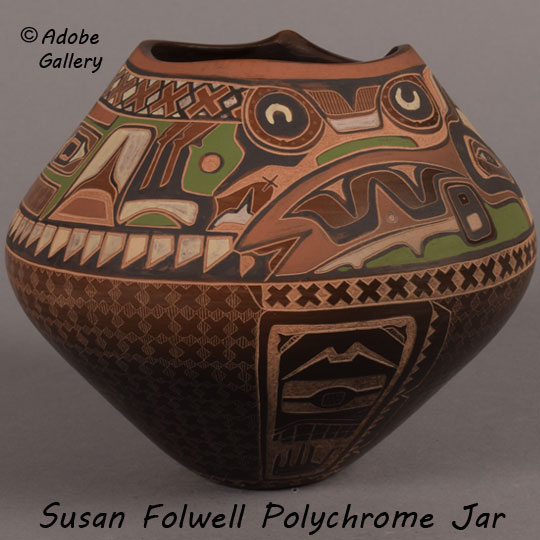 This polychrome pottery jar was created in 1997 by Santa Clara Pueblo artist Susan Folwell. It is a unique and beautiful jar in many ways, perhaps most notably in its incorporation of Northwest Coast Native American imagery. Folwell's interpretations of these motifs cover much of this jar's exterior.

Folwell's elaborate design work was executed using both colored pigments and sgraffito carving. Some elements were painted, and others were carved in relief. Others, remarkably, were formed using a skillful combination of both techniques. The design band that extends from the jar's widest point up to the rim incorporates designs in maroon, green, and white. Down below, a hypnotic pattern of hundreds of X shapes appears, with two sgraffito carved vertical bands passing through. The jar's rim takes the form of a loose square with rounded edges; one corner varies by dipping down and out into a hook shape. The bottom of the jar is signed Susan Folwell and dated "97.

Susan Folwell (1970- ) Mesa Flower grew up in a family of artists. Her grandmother is Rose Naranjo, her mother Jody Folwell, and her sister is Polly Rose Folwell. Susan recalled, "As a child, I helped my mom. Honestly, it was a chore." Susan loved art but did not plan to be a potter. She studied design and fine arts photography at the Center of Creative Studies in Detroit, MI. She found that it did not give her the artistic freedom she wanted. So, she returned to the clay. Now she takes pride in being an independent artist. Susan uses traditional pueblo methods and materials, and incorporates imagery not just from the pueblos but from a wide variety of Indigenous cultures. Her works have been featured in books and won many awards at Santa Fe Indian Market.

Provenance: this Susan Folwell Polychrome Jar with Northwest Coast Designs is from a private collection