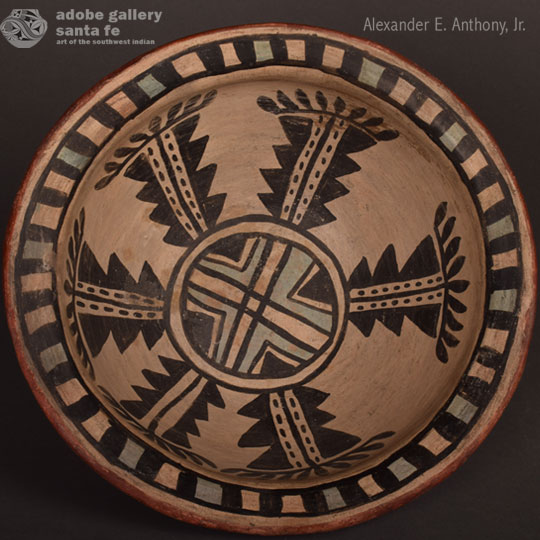 Potters at Tesuque Pueblo used a pale blue pigment to highlight their designs in the 1880s, like that used on pottery at San Ildefonso in the 1890s.  This blue pigment was applied after firing.

Was the addition of blue pigment to pottery the idea of one of the Santa Fe merchants?  Perhaps.  It could, however, have been the brainchild of a potter or member of her family deciding to try something different—something that caught on at Tesuque and San Ildefonso with other potters.  Published information does not provide any clues as to the origin of the use of blue pigment or the source of the blue pigment, although some have stated it might be ink.

Another possibility that has been suggested is that the blue pigment could have been laundry bluing agent. Laundry bluing is a household product used to improve the appearance of textiles, especially white fabrics. Used during laundering, it adds a trace of blue dye to the fabric. White fabrics acquire a slight color cast after use (usually grey or yellow). Since blue and yellow are complementary colors in the subtractive color model of color perception, adding a trace of blue color to the slightly off-white color of these fabrics makes them appear whiter. Wikipedia

Condition: small chips and abrasions around the rim have been professionally conserved.  There are no repairs on the interior of the bowl or overpaint on the design.

Provenance: this Historic Tesuque Polychrome Pottery Bowl with Blue Pigment is from a personal collection of a family from Colorado

Reference and Recommended Reading:  Pottery of the Pueblos of New Mexico 1700-1940 by Jonathan Batkin