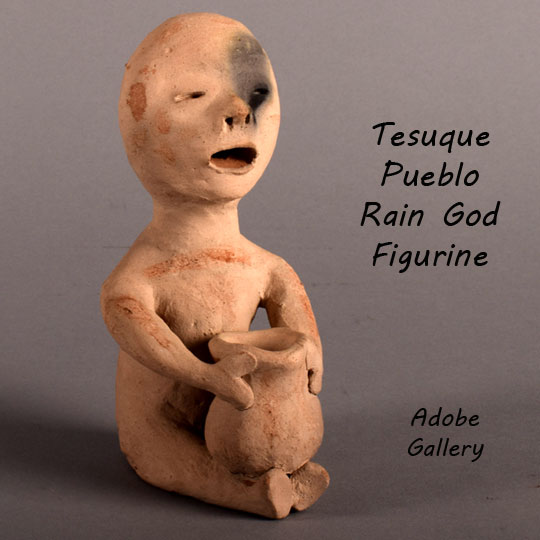 This is a wonderfully sculpted Tesuque Pueblo pottery figurine reflecting the pre-1900 style of casual finishing, rather than the later style of a polished finish.  The historic rain god figurine has a watery slip placed over the construction clay.  The slip was left in a matte finish rather than polished.  There is a fire cloud over the left eye.  The fingers were sculpted in the style popular at the time.

In the late 1800s, Nature had its influence on the pueblo when severe droughts made it more difficult to produce crops for their own use.  Villagers began drifting into Santa Fe to trade pottery or other personal possessions for food.  Their increased encounter with traders in Santa Fe could have been responsible for the emergence of the rain god figurines.  Merchants were looking for tourist items to sell that were small, inexpensive, and appeared to be of a religious nature.

The rain god figurines had no religious significance, no historic connection to Tesuque, and probably were the invention of a trader.  A rain god certainly sounded like something created to bring rain, thus it had significance to the tourists.  The earliest documented rain god figurine is 1879, a year before the train arrived in New Mexico, but traders were already established and selling Indian goods in Santa Fe.

Provenance: this Vintage Tesuque Pueblo Late Nineteenth Century Pottery Rain God is from the estate of Henry Christensen III, attorney at law in New York City to whom we sold this in 2005.

When Rain Gods Reigned: From Curios to Art at Tesuque Pueblo [SOLD]
by Duane Anderson