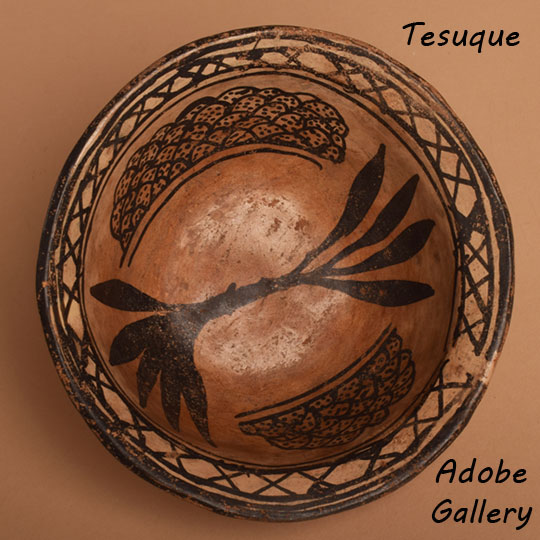 Documentation applied to pottery by a purchaser is invaluable information, even if it is incorrect.  This bowl that was made at Tesuque Pueblo in the late 1800s, must have ended up at Fort Wingate, near Gallup, New Mexico, because that is the likely location from which the purchaser acquired it.  Beautifully written in cursive script on a paper attached to the base is Navajoe Pottery from Fort Wingate New Mexico.

The history of the bowl is somewhat revealed by that simple note attached to the base.  It provides us with the location from which it was purchased.  It sheds light on the travels the bowl made from Tesuque or Santa Fe to Gallup.  Perhaps the commissary at Fort Wingate stocked such items for the soldiers and their families.  Possibly even Jake Gold, Santa Fe merchant, provided pottery and other items to the fort.

The bowl is of the style from the 1880s era with its rolled-out rim.  The interior is decorated with stacks of billowing clouds on the interior wall and a leafy plant rising from the bottom of the bowl.  The rim is filled with a band of X elements through which is a ceremonial line break.  The exterior of the bowl is undecorated but has a one-inch wide red band wiped on at the rim.

Provenance: from a personal collection of a family from Colorado

Reference and Recommended Reading:  Pottery of the Pueblos of New Mexico 1700-1940 by Jonathan Batkin